From Scotland With Love: more B25 location filming

The Scottish location filming scheduled for Bond 25 in August appears to have already started. The beginning of last week saw some footage taken for a car chase scene along the shores of Loch Laggan, which is located in the Aviemore area in the Cairngorms National Park.

Although security was notably tight in the area, some lucky walkers near the location managed to catch sight of the car chase being filmed by production crew, who were using a helicopter and camera-drone to capture the fast-paced action. Interestingly, some of the filming involved use of a Toyota Land Cruiser, which is the same kind of vehicle that was involved in some of the recent Norwegian location filming.

It is understood that the main location filming for the latest 007 movie in Scotland will take place in the same area in August, and there have been reports in the UK press that a temporary ‘hotel’ has been set up on the remote Ardverikie estate, which will house up to 300 production crew, while the principal stars will stay in a hotel located nearby.

EON location scouts have chosen a truly beautiful area of Scotland for the filming. The Ardverikie estate is famous for its rugged and eye-catching landscape, and has seen a number of TV and film productions utilise the location in the past, such as Monarch of the Glen and Outlander.

There is also much excitement being expressed by Scottish tourist chiefs at the return of 007 to the region. Stewart Nicol, chief executive of Inverness Chamber of Commerce, told the Mail newspaper: ‘The return of Bond is fantastic news, and will be a multi-million boost to the Highland economy. It is a really significant benefit to the whole region’. He pointed out that the scenes of Glencoe shot for Skyfall attracted global interest, so having B25 promoting the region again ‘will be a massive boost’.

There has been a long and close link between James Bond and Scotland, of course. Bond creator Ian Fleming, who had been impressed with Sean Connery’s first two Bond films and the actor’s interpretation of 007, decided to give Bond Scottish roots, in tribute to Connery’s own origins. Bond continuation author John Gardner also made use of Scotland for his first Bond novel Licence Renewed in 1981, where the main villain was Anton Murik, who was Laird of Mulcady and lived in a Scottish castle.

Bond on screen has also seen use of Scotland. In 1963, sequences for From Russia, With Love (doubling up for south-east Europe) were shot in Scotland by director Terence Young. Daniel Craig’s third Bond movie, Skyfall, also made brief use of a real-life Scottish location, while some key sequences shot in Surrey for the movie doubled up for Bond’s ancestral home in Scotland. George Lazenby in On Her Majesty’s Secret Service (1969) also famously reminded audiences about Bond’s Scottish ancestry when he wore a kilt at Piz Gloria.

The real-life Faslane Polaris submarine base in Scotland was also utilised for a key dialogue scene between Bond (Roger Moore) and the Minister of Defence (Geoffrey Keen) in The Spy Who Loved Me (1977). Similarly, a brief Scotland-based funeral scene appeared in Pierce Brosnan’s third 007 movie The World Is Not Enough (1999), which also saw MI6 using a Scottish castle as a regional HQ. It is also perhaps worth noting that the rogue Charles K. Fleldman version of Casino Royale (1967) made use of Scottish themes and locations early in the movie.

Welcome home, James. Scotland’s been expecting you. Watch this space for further B25 news as it happens. You know the name, and you know the number. 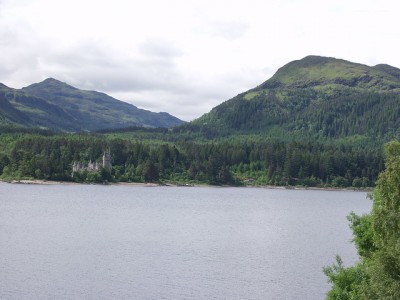