From Pinewood With Love: New documentary on 007 studio 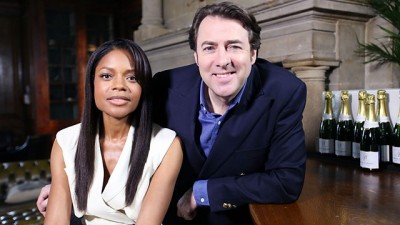 The new documentary, which is part of the current BBC Arts celebration of the genius of British cinema, is entitled Pinewood: 80 Years of Movie Magic, and will be screened on BBC-2 at 9.00pm GMT. It will provide a history and profile of the famous studios, which are located at Iver Heath, in the county of Buckinghamshire, approximately 20 miles west of central London.

Ross was given unprecedented behind-the-scenes access to the studio and its wide complex of production and other facilities, and he was able to speak to stars such as Dame Joan Collins, Hayley Mills and Carry On team member Barbara Windsor. He was also able to chat with director Matthew Vaughn, and personally participated in both a car and underwater stunt.

And for James Bond aficionados, there is the added bonus of some brief insights into SPECTRE, the eagerly-anticipated new 007 adventure with Daniel Craig, as Ross was able to speak to both Naomie Harris (Miss Moneypenny) and EON producer Michael G. Wilson, and was allowed to have a sneak view of one of the Bond sets.

The famous studios, which were founded by J. Arthur Rank and Charles Boot in 1935 and officially opened in 1936, have proved to be extremely important to the British film industry over the last eighty years. As well as being the spiritual home of the James Bond movie franchise, the studio has hosted the Carry On, Superman and Harry Potter series, and has recently been the main production facility for the latest Star Wars movie. Pinewood’s technicians, film crews, and other production workers, together with its office space, workshops and some state-of-the-art facilities, such as the ‘Q’ Stage (which opened in December, 2013), have gained a world-wide reputation for movie-making excellence.

In May, 2013, director Sam Mendes, speaking to the UK’s Guardian newspaper, emphasised the importance of Pinewood Studios and its central place in future film production in Britain, including the 007 franchise.

For the secret volcano crater rocket base run by Ernst Stavro Blofeld and Sp.e.c.t.r.e. in the fifth 007 movie You Only Live Twice (1967), Bond co-producer Albert ‘Cubby’ Broccoli handed set designer Ken Adam the princely sum of $1m (a phenomenal amount of money at the time). The volcano set designed by the highly talented Mr. Adam (now Sir Ken Adam) was 130 foot high and had a diameter of 440 foot, and could be seen from about 3 miles away. Local residents in Pinewood village and surrounding areas would often come to the studio perimeter fence and gaze in awe at the massive construction.