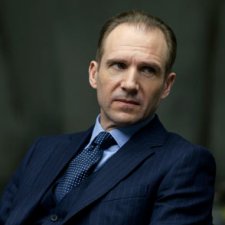 The acclaimed film and stage actor Ralph Fiennes, who became the new ‘M’ in Skyfall and reprised the role in Spectre, has received high praise from the critics for his new interpretation of the King in Richard III, the stage play which is currently running at the Almeida in London.

The new production of Shakespeare’s Richard III is directed by Rupert Goold and sees Fiennes portraying the King as a nasty tyrant in a modern-day context. As many of the critics have noted, Fiennes is clearly relishing the role. According to the Daily Mail, for example, Fiennes ‘is rather brilliant’ in the title role, and speaks the verse ‘with expert precision’. Similarly, the Sunday Times in its review called Ralph’s interpretation ‘A villain worthy of 007’. According the newspaper, Fiennes – dressed simply in a double-breasted blazer and a polo-neck sweater, with a black glove on his right hand –  is ‘so like a Bond villain’ that you think he must have a fluffy white cat somewhere about his person! Interestingly, the new production’s opening scene also cannily taps into a very recent archaeological discovery, when the real King Richard’s bones were discovered during a major dig under a car park in the city of Leicester.

Fiennes and the Dark Side

As many Bond fans know, Ralph Fiennes has had an extensive and wide-ranging acting career, both on stage and in films. This has ranged from the sadistic Nazi Amon Goeth in Schindler’s List (1993), through to his role as the aristocratic Count Laszlo de Almasy in the Oscar-winning The English Patient (1996) and, more recently, his return to villainous roles in Red Dragon (2002), In Bruges (2008), and as Lord Voldemort in the smash-hit series of Harry Potter movies (2005-11).

His role in Schindler’s List is often seen as his ‘breakthrough’ role, in the sense that it really made Hollywood sit up and take a great deal of interest in his unique talents. Fiennes, who has been quite wary of the press over the course of his career, has nevertheless given some interesting interviews in recent years, especially since he became involved in the Bond franchise as 007’s boss. He is equally comfortable with trying out both ‘evil’ roles as well as heroic ones, but clearly relishes the chance to play villains when they are offered.

In February, 2014, in an interview he gave to the Financial Times, Fiennes told the newspaper’s FT Weekend Magazine: ‘Amon Goeth was a huge breakthrough for me. It was brilliantly written by Steven Zaillian, and the way I played him was totally to do with the way I was directed by Steven (Spielberg)’. Pressed further by the FT‘s Arts editor to talk about the challenge of playing ‘evil’ figures, Fiennes responded: ‘Of course Voldemort was terrific fun to act. But it was mythic evil. Goeth is a historical figure, there have been biographies of him’. Fiennes pointed out that what Goeth stood for is all those men and women who agreed with Hitler’s horrific proposals for the Final Solution.

In 2011 Fiennes also directed his first film, Coriolanus, in which he took the lead role and also updated the famous play by Shakespeare to give it a gritty political setting in a fictitious state, located somewhere in the contemporary Balkans. Fiennes again injected some nicely dark elements into the movie and his central role. The screenplay was written by Skyfall and Spectre scribe John Logan. And, of course, Fiennes recently played Gareth Mallory in both Skyfall and Spectre, a rather hardline Government intelligence figure who, towards the end of the 23rd 007 adventure, inherited the role of MI6 boss ‘M’ from the late Olivia Mansfield (Dame Judi Dench).

Not many people realise that Fiennes has been something of a Bond fan himself over the years, and this has emerged in various interviews in the past. In 2011, for example, speaking to IFC (the Independent Film Channel, based in New York), he said: ‘I love the Bond books particularly. I like the books even more than the films. I like the darkness of the books. But I’ve also enjoyed all the films’. He revealed that he vividly remembered seeing On Her Majesty’s Secret Service (1969), starring George Lazenby as Bond. Again, in 2012, speaking to the Scottish Daily Record newspaper, Fiennes expressed his admiration for the Ian Fleming Bond novels, and said he used to be a ‘complete nerd about the books and the detail in them. They are fantastic. There was Fleming’s obsession with different kinds of champagne and caviar. He kind of fetishises these things’.

As well as appearing as the new ‘M’ in both Skyfall and Spectre, it is understood that Fiennes was also given an option in his contract to appear as ‘M’ in Bond 25 if he so wished. Let’s hope this indeed happens. As with Judi Dench’s interpretation, Ralph Fiennes has also brought some really superb gravitas to the role. 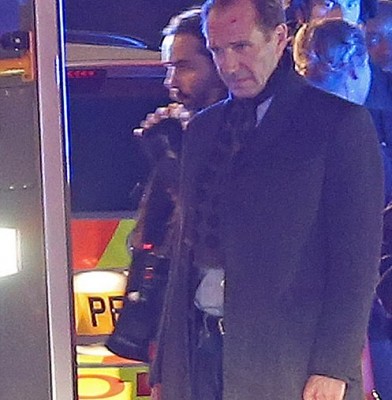 Fiennes filming Spectre on Westminster Bridge in May 2015