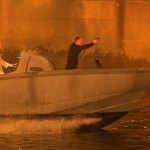 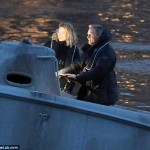 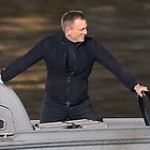 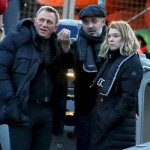 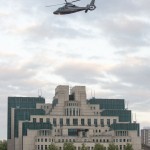 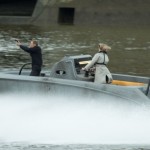 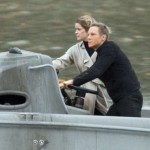 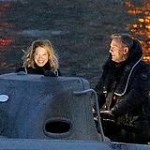 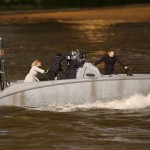 It seemed just like old times when James Bond took to the River Thames again for the latest location filming for SPECTRE, which took place near the real-life MI6 building and also near the Vauxhall, Lambeth and Westminster Bridges in central London.

The latest London filming, which was efficiently carried out on the dry, if somewhat chilly, evening of Sunday, May 17, and lasted into the early hours of Monday morning, May 18, involved Daniel Craig and Lea Seydoux, and also the stunt doubles for both stars. It was overseen by director Sam Mendes.

The JBIFC had a spy on the ground, who has filed the following short briefing for your eyes only.

An impressive-looking ‘action’ helicopter, together with a second camera helicopter, was used in the new Thames shooting, while Bond (Craig) and Madeleine Swann (Seydoux) were filmed speeding along the River in a military-style speedboat. The nifty power-boat was driven at some speed under Lambeth Bridge, with 007 taking aim at the helicopter with his side-arm as Swann stears the craft and the helicopter heads towards Westminster and the Houses of Parliament.

During the day, various arc-lights for the filming were placed in position on the public walkway and concourse area outside the MI6 headquarters and also on the main bridges nearby, together with a number on buildings and walls along the riverside embankment. The filming activities kicked off in the early evening with some trial runs in the speedboat carried out by the stunt doubles.

Craig’s stunt-double, wearing a latex mask to render him as much like Craig as is reasonably possible, took up position towards the front of the boat, while Seydoux’s double (wearing a mackintosh-style outfit) took control of the boat’s wheel. A short while later (as the daylight slowly began to fade) the stunt doubles were filmed at a distance by a camera boat, as Bond’s boat pursued the main ‘action’ helicopter as it flew down the Thames from the direction of Vauxhall Bridge, via Lambeth and towards Westminster.

As dusk faded into dark, these ‘rehearsal’ takes were filmed again. The main ‘action’ helicopter, an Aerospatiale Dauphin 2, which took off from Riverside Walk Gardens, next to Vauxhall Bridge, was filmed hovering approx 150 feet above the Thames right near the MI6 building, and it then flew down the River, over Lambeth Bridge and towards Westminster Bridge, followed by the ‘camera’ helicopter.

After watching their stunt doubles from the shore, Daniel Craig and Lea Seydoux also took to the Thames in the speedboat, and were filmed following the same route as the stunt doubles had taken earlier. The helicopter activities were finished by midnight, but filming continued into the early hours of Monday morning, and included various close-up shots being taken of Craig and Seydoux as they manned the boat.

At one stage, a sequence involving some extras on Vauxhall Bridge (the Bridge closest to the MI6 building) was also filmed. As pedestrians walked over the Bridge, a loud thud was heard, causing a number of alarmed passers-by to run to the side of the Bridge to try and see what had just taken place. The extras performed their duties well.

Interestingly, two fire engine vehicles were on hand to ensure the roads across the bridge were shiny wet before takes, to create the impression it had just rained (ironically, just a few hours later, the daylight hours of Monday itself saw extensive rain in London!). The overall effect on the big screen, with lights playfully reflected in the puddles, should look fantastic, as will the shots of the helicopter sweeping over the skyline against the backdrop of the Thames and Big Ben.

It was quite a long night, with only a few sturdy onlookers able to stay the course, sustained by regular cups of coffee from a nearby 24-hours cafe. Craig was on call and on set until about 5.00am in the morning. Some Port of London Authority (PLA) staff were also seen in the area. The PLA is the authority that film-makers have to approach to get approval for use of the River and its facilities.

The latest location filming for SPECTRE has, in a sense, returned 007 to some familiar old haunts. In 1999, these very same areas long the Thames were used extensively for filming the pre-credits sequences for The World Is Not Enough. Back then, the film-makers had to be given special permission to film outside the MI6 building itself and also alongside the Houses of Parliament by the then Foreign Secretary, Robin Cook (the Foreign Secretary is the British government Minister directly responsible for MI6).

SPECTRE has already made use of various London locations. In December, 2014, some water-based sequences were filmed both at Camden Lock and also on the main River Thames itself, involving Craig and Rory Kinnear (Bill Tanner). Some shots of Bond’s residence were also filmed at a large townhouse in the Notting Hill area, with Craig and Naomie Harris (Miss Moneypenny).

In early March this year, some sequences were shot one Sunday morning outside the Department of Energy and Climate Change building in Whitehall (near Old Scotland Yard), a building which was also utilised for the rooftop scene between Bond and Moneypenny in Skyfall. This time, Craig was filmed driving the iconic Aston Martin DB5 in a road near the building. And on April 18, Mendes directed some sequences at City Hall, the main assembly building of the London Mayor and the Greater London Authority, which is located by the River Thames near Tower Bridge. It is believed that the building was used after the Welsh Assembly refused permission for their building to be used by the film-makers.

All in all, central London, and the River Thames in particular, seem to have a special place in the Bond universe. And long may this continue.