From Le Chiffre to Lecter 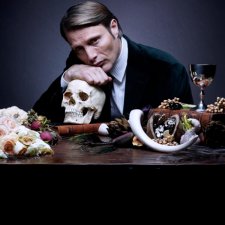 The Danish actor Mads Mikkelsen, who played the sinister Bond villain Le Chiffre in Casino Royale (2006), has revealed that he was already well-read on the subject of serial killers before he started his new TV series Hannibal.

The new TV drama, which saw its first episode screened in the UK on May 7, has the highly versatile Mikkelsen as Dr. Hannibal Lecter, the charming but secret serial killer and cannibal, a character originally created by author Thomas Harris and made famous by both Brian Cox in Manhunter in 1986 and Anthony Hopkins in The Silence of the Lambs in 1991.

As part of the tie-in promotion of NBC’s new drama Hannibal in the UK, the 47-year old former Bond villain recently gave an interview to the London Metro newspaper. During the course of this interview, he explained some of the background behind the creation of the new series and the possible motivations of the character of Dr. Lecter. At one point, Mikkelsen said of his new interpretation of Lecter: ‘He is a man who is in love with the fine arts, who loves fine cooking. Everything banal, he hates; everything refined, he loves’.

Of the previous interpretations of Lecter by Cox and Hopkins, Mikkelsen said: ‘Both of those performances were iconic and I am not trying to emulate them. We are starting in a different situation. My Hannibal is not yet captured, I am still out on the loose, I am a practising psychiatrist, so I behave a little differently’. He also told the Metro: ‘One of the things I found interesting from the books was that when he rips out the tongue of a nurse, his pulse does not get above 60. But in our version, his heart does beat sometimes, when he chooses’.

As the Metro newspaper noted, Mikkelsen is seemingly unafraid of dark roles: as well as playing the memorable Bond villain Le Chiffre (Ian Fleming’s first fictional baddie), who had a blood-weeping eye in the 2006 movie version, Mikkelsen won last year’s Best Actor prize at the Cannes Film Festival for his role as a teacher falsely accused of abusing a child in the critically-acclaimed movie The Hunt (2012). And he admitted to the Metro that he was already well-read on the subject of serial killers before starting Hannibal: ‘I am ashamed to say I knew quite a lot about that before, because I find it fascinating. I also have a tendency towards biographies of Stalin, Hitler, Genghis Khan, people like that’.

As many Bond fans know, as well as coming up against Daniel Craig’s first turn as 007 in Casino Royale (and ending up dead in the process, seemingly eliminated by the Quantum organisation), Mads was able to return to the role of Le Chiffre in 2008: he did the voice to Le Chiffre in the 2008 video game 007: Quantum of Solace. He remains very greatful for his ‘breakthrough’ role in the 21st Bond movie, as it brought him to international attention, and opened numerous acting doors for his career.

Mikkelsen is currently shooting his next big movie project, The Salvation, which is set in 1870s America and is due to hit cinema screens in 2014. And there has been some interesting casting for the new movie: the cast includes Eva Green (Vesper in Casino Royale) and former Bond villain Jonathan Pryce (who played Carver in Tomorrow Never Dies). That must be creating some interesting on-set chats.

Bond Trivia Note: The casting of Mads Mikkelsen as Le Chiffre was confirmed in February, 2006, before any announcements about some of the other main roles in Daniel Craig’s first Bond movie. Director Martin Campbell quickly made the announcement at a press conference held at the Czech Republic’s Barrandov Studios, as it had been reported that Mikkelsen’s father, a taxi driver, had told some of his customers that his son had won the role of the Bond villain!