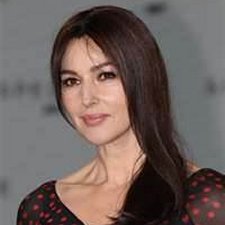 The beautiful Italian actress Monica Bellucci, who will join French actress Lea Seydoux as one of the two new Bond women in SPECTRE, was given a detailed profile in the UK’s Sunday Times newspaper last Sunday (December 7).

Bellucci, who is playing the role of Lucia Sciarri in the new Bond movie (which commenced principal photography earlier this week), was first introduced to the world as a Bond woman at the Pinewood Studios SPECTRE press call last Thursday (December 4). She said at one point: ‘James Bond is our fantasy – the ideal man… the man is a protector, he is dangerous, mysterious and sexy, and a perfect English gentleman’. Asked what makes a good Bond woman, Bellucci replied: ‘A good director!’

The 50-year old star was seen as a surprise announcement for the new 007 movie, but was also given very high praise in the media coverage of the press call, and has already helped create extensive coverage for SPECTRE in the British and wider global media. In fact, the EON publicity department must be exceptionally pleased with all the media attention that the new movie has already garnered.

This invaluable publicity was echoed at the weekend. In the Sunday Times profile, it was pointed out that ‘for millions of her worshippers the news that the Italian bombshell is to star in the latest Bond film is the cause of unmitigated rapture’.

The profile continued: ‘Radiating an earthy beauty, Bellucci comes from a line of voluptuous divas, such as Sophia Loren, Monica Vitti, Gina Lollobrigida and Claudia Cardinale’, who ‘transfixed previous generations with their sensuous and mysterious allure. She has been named the most desirable woman in the world’.

Interestingly, as many Bond fans know, and as the media coverage again reminded people, it is not the first time Bellucci has been linked to the world of Bond. She first auditioned to be a Bond woman for 1997’s Tomorrow Never Dies (she was considered for the role of Paris Carver) but, after pressure from MGM, she lost out to American actress Teri Hatcher (which caused much disappointment for the then-007 star Pierce Brosnan).

As the Sunday Times profile noted, conveniently for the Bond shoot, Monica, who married actor Vincent Cassel in 1999 but separated from him in 2013, currently has a house in London, in addition to properties in Italy (where SPECTRE will also shoot), France and Brazil. She also likes Britain, comparing it favourably with her native Italy.

The profile pointed out that Bellucci, who was born in the small Umbrian city of Citta di Castello, spent her early years admiring and dreaming of emulating the success of Italian film stars such as Lollobrigida: she once reflected: ‘Maybe that’s why I do movies. They came with such personality; their physiques were so strong, so feminine’.

At first, Bellucci wanted to be a lawyer, but while studying at Perugia University a friend took her to Milan to visit a few modelling agencies, and she increasingly took on modelling work. After just a few years of modelling, she was spotted in a magazine by the Italian director Dino Risis, who hired her for her first movie, Via Coi Figli. Two years later her magazine picture also caught the eye of Francis Ford Coppola, who cast Monica in his new movie version of Bram Stoker’s Dracula.

Shortly after this, she went back to Italy and took serious acting lessons, having decided that she wanted to carve out a major career in movies. In a sense, she has never looked back. It is going to be really interesting to see how Sam Mendes will help her shape her role as Sciarri in SPECTRE.

In between making From Russia, With Love (1963) and Goldfinger (1964), the then-007 Sean Connery made two movies, Marnie (for Alfred Hitchcock) and Woman of Straw. The latter movie, which is one of Sir Sean’s less well-known films, was shot partly at Pinewood Studios in England, and was directed by Basil Dearden. It also starred Italian actress Gina Lollobrigida, who was at the time one of Italy’s leading international movie stars.