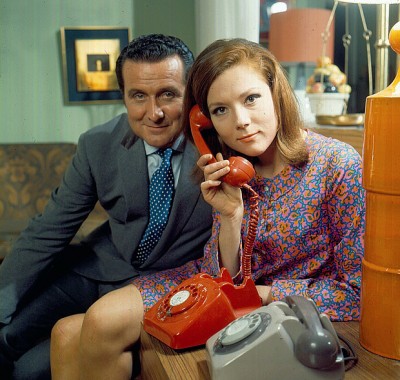 The JBIFC was very sad to hear that actor Patrick Macnee has died at his home in California, aged 93. One of the most enduring and iconic images of the 1960s was surely that of Patrick as the super-suave secret agent John Steed, the lead character in the popular British TV series The Avengers and, later, The New Avengers.

John Steed, with his Edwardian suits, curly-brimmed bowler hats and rolled umbrella, seemed to embody everything that people in the 1960s associated with ‘englishness’: impeccably dressed, calm and unruffled under fire, quick-witted, and always out to defend the realm from the megalomaniac plots devised by the enemies of Queen and country. As Macnee later explained, Steed was both elegant but resourceful; he avoided violence if possible (he never carried a gun), but was also prepared, if necessary, to use his umbrella as a sword-stick when in a tight spot: ‘I wanted an outward appearance of extreme style, and, underneath, steel’.

Among his other numerous roles Macnee was also, of course, Sir Godfrey Tibbett in Roger Moore’s final 007 movie, A View To A Kill (1985). In the following, the JBIFC looks back briefly on Patrick Macnee’s fascinating life and career.

Born Daniel Patrick Macnee in London in 1922, the elder of two sons, Macnee was raised by his father Daniel (known as ‘Shrimp’) and his mother, Dorothea, who were both quite unusual and eccentric characters. His father was a successful racehorse trainer but also had a big gambling habit, and could also be rather volatile when drunk, sometimes drawing an unloaded revolver on guests at dinner parties. His mother, who had aristocratic connections, was much younger than her husband and, when Patrick was eight, went to live with another woman, who insisted on being known as ‘Uncle Evelyn’.

Patrick attended Summer Fields Preparatory School, near Oxford, where he gained his first taste of acting at the age of 11, alongside fellow pupil Christopher Lee (who also sadly died earlier this month). With financial help from ‘Uncle Evelyn’, Macnee was sent to Eton public school, where he made use of his time to secretly sell pornography to fellow pupils and also horse-racing tips, which he got from his father. But he was caught and expelled from Eton.

He then trained as an actor, his first role on screen being a small part in The Life and Death of Colonel Blimp (1943), a controversial film that the British government (especially Churchill) decided was too disrespectful of the Establishment and tried to suppress. But by the time the movie was released, Macnee had been called up for wartime national service.

In 1942, he enlisted in the Royal Navy as an Ordinary Seaman, but rose rapidly through the ranks to become a navigator of motor torpedo boats, based in Dover, and seeing action in the English Channel and the North Sea. When he was once asked why John Steed never carried a gun in The Avengers, Macnee said that he had just come out of a world war ‘in which I’d seen most of my friends blown to bits’. When he was demobbed from the Navy, he was determined to revive his acting career and sought to break back into the acting world. He took small roles in theatre in the West End and also toured Germany. But he decided that Canada and America offered better possibilities, where he could make use of his diamond-cut english accent, and so left for Canada in 1951. He worked mainly in TV shows in Canada and also moved on to Los Angeles. Although he sent money home to his young family in the UK, the move abroad came at the cost of his first marriage.

As he himself acknowledged, Macnee’s big break came in 1961, when a TV producer offered him a support role in a new British TV detective series, The Avengers, starring the young Ian Hendry as Dr. David Keel. When Hendry left the series, fearing typecasting, it seemed that Macnee’s character Steed would also be dropped. However, Macnee apparently saved his role by offering to radically reinvent his character in a new and daring way; he discarded his detective’s raincoat and, drawing inspiration from the Scarlet Pimpernel, made Steed a heroic, stylish and dashing figure, always impeccably turned out.

Macnee also worked hard on developing a good screen relationship with his co-star, Honor Blackman, whose own character – Cathy Gale – was also becoming equally well-known for her sexy leather-clad outfits and her tough fighting skills.  It was a pairing made in heaven and, when the series moved in an increasingly ‘espionage’ themed direction (partly tapping into the early ‘Bond-mania’ of the time), it drew ever-larger audiences. The popular series, which ran from 1961 to 1969, also began to employ some fantasy and science fiction plotlines, and arguably became one of the major British TV cult shows of the ‘Swinging Sixties’.

Macnee also reprised his role as Steed when the show was revived as The New Avengers in the mid-1970s, alongside former Bond girl Joannna Lumley and the late Gareth Hunt. Episodes are still shown around the world even today.

Macnee knew and liked Bond author Ian Fleming, but he was not fond of the James Bond character as portrayed in Fleming’s novels. In many ways, his own secret agent, John Steed, was very different to 007. Indeed, Macnee once said that he found Fleming’s hero ‘perfectly repulsive, sadistic and disgusting… the very antithesis of Steed, in fact’. However, there were still certain inescapable similarities between The Avengers and the big-screen world of EON’s version of James Bond: the suave and stylish clothing, the fascination with gadgets, the escapist plots with a hint of sci-fi, the devious and slightly mad villains, and the strong and confident leading women.

Honor Blackman, as Cathy Gale, made such an impact that she was noticed by the Bond producers, Albert R. Broccoli and Harry Saltzman, and was offered the role of of Pussy Galore in Goldfinger (1964). Similarly, Blackman’s replacement, Diana Rigg – who played the high-kicking and equally stylish Emma Peel in the series – also moved on to Bond, taking the role of Tracy in On Her Majesty’s Secret Service (1969). For Bond aficionados, if you watch The Avengers carefully, you will also see guest appearances by some other familiar faces from the world of 007.

When he hung up his bowler hat, Macnee took on a number of interesting film roles, including as Dr. Watson to Roger Moore’s Sherlock Holmes in the TV movie Sherlock Holmes in New York (1976), which also starred John Huston as Prof. Moriarty. Macnee also later starred again alongside Roger Moore, with a role in the war movie The Sea Wolves (1980), where Macnee played Major ‘Yogi’ Crossley. Moore and Macnee were part of a very distinguished cast, which included Gregory Peck, David Niven, and Trevor Howard.

And, of course, Macnee eventually became part of the world of James Bond himself, alongside his friend Roger Moore, when he took the role of racehorse trainer and MI6 agent Sir Godfrey Tibbett, Bond’s hardpressed ‘chauffeur’ in A View To A Kill (1985), directed by John Glen. Macnee and Moore had clear on-screen chemistry, and the pair are one of the joys of the movie. Macnee also went on to provide the narration for a series of Bond ‘Making of’ documentaries.

When he heard the news about Patrick Macnee, former 007 Sir Roger Moore released a special message, saying: ‘So very sad to hear Pat Macnee has left us. I have so many happy memories of working with him. A true gent’.

In a delicious irony, the first screen James Bond – Sean Connery – took the role of the main villain in the 1998 big-screen version of The Avengers, while the role of John Steed was played by Ralph Fiennes, the new ‘M’ in Skyfall, and soon to be seen as ‘M’ again in Spectre later this year. Macnee himself was apparently very disappointed with the Avengers movie.