From Bond to Blonde: great future ahead for Ana de Armas 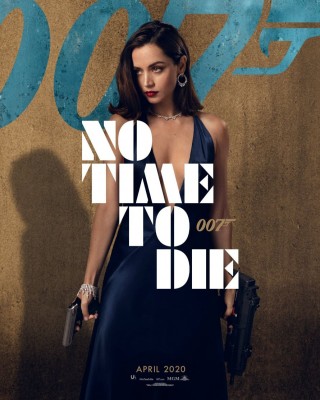 One of the exciting highlights of the new James Bond movie No Time To Die will be Cuban-Spanish actress Ana de Armas, who will play Paloma, a CIA agent.

We predict a big future for de Armas, who captured the attention of Hollywood through her performance in 2017’s Blade Runner 2049, and recently appeared alongside Daniel Craig (who played detective Benoit Blanc) in Knives Out, playing housekeeper Marta Cabrera, who is under suspicion of murder.

In November, 2019, de Arnas gave a key interview to The Hollywood Reporter, alongside fellow rising star Lashana Lynch, as part of the 007 publicity campaign that is about to roll. In the interview, it was revealed that it was Bond producer Barbara Broccoli who first thought of de Arnas for No Time To Die. The two had met briefly five years earlier in Los Angeles, and evidently de Arnas made a good impression on the EON producer.

When de Arnas wrapped on Knives Out, she got a call from No Time To Die director Cary Fukunaga. With the role in Bond, she is about to become a globally-known star.

According to Baz Bamigboye, writing in his showbiz column in the UK’s Daily Mail newspaper (10th January), the actress has ‘a hectic year ahead’. She will be starring with Ben Affleck in the psychological thriller Deep Water, which is based on a 1957 thriller by Patricia Highsmith. Adrian Lynne is directing the new movie, which is currently shooting in New Orleans.

Bamigboye has also been shown some stunning images of de Armas in another of her new films, Blonde, in which she plays a fictionalised Marilyn Monroe. The new film is apparently based on Joyce Carol Oates’s novel about the exploitative process that saw Norma Jeane’s metamorphosis into Marilyn. Dark-haired De Armas was transforme din the photos, via blonde wig fashioned in classic Monroe style. The new movie, which is directed by Andrew Dominik, will be released through Netflix in the autumn of 2020.

Interestingly, while de Armas has gone from Bond to Blonde, Daniel Craig may go back to Blanc from Bond! Since he announced his departure from 007, there has been much speculation about what he might do in his post-Bond career.

Bamigboye noted the current rumours that there may be a return for de Armas to the role she played in Knives Out, as the director Rian Johnson has hinted that he would like to do a follow-up to the movie. Moreover, Johnson has also said that he and Daniel Craig want to turn Benoit Blanc into a franchise. For Bond fans, Bamigboye also revealed some other very important news: No Time To Die, which is in post-production, is still being edited, but an unfinished cut of the picture will be screen-tested over the next two weeks. Sounds very good to us.

Watch this space for further 007 news as it develops. You know the name, and you know the number. 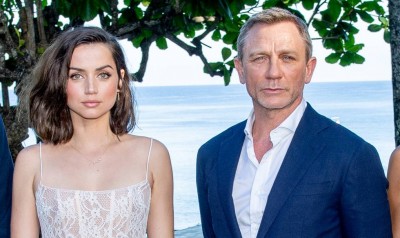 Ana de Armas with Daniel Craig in the NTTD launch at Goldeneye in Jamaica in 2019.