From BAFTA With Love 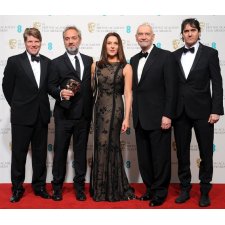 The Skyfall director Sam Mendes, Bond producers Michael G. Wilson and Barbara Broccoli, and two of the movie’s writers, Neal Purvis and Robert Wade, all took to the stage to accept the award. Dame Judi Dench was also present for the ceremony, and sat next to the key members of the Bond team in the main audience, while Javier Bardem was also seated not far away, too.

Michael G. Wilson, in his acceptance speech, pointed out to the audience and to the watching TV viewers that Skyfall had broken the all-time box office record in the UK. He also reminded the audience that, since its creation, the James Bond franchise had been ‘nurtured by a whole host of directors, actors, cast, and crew’ over the years, so that – today – ‘James Bond is loved throughout the world’. Wilson added: ‘And it is on behalf of those film makers that Barbara and I accept the award. Thank you’.

Sam Mendes followed this with his own equally gracious and thoughtful speech, where he thanked the ‘1,292’ people who had worked on Skyfall and said that the BAFTA award ‘really is the icing on the cake’. Mendes also paid special tribute to Daniel Craig for ‘his brilliance, his friendship, his bravery and his sheer bloody-mindedness!’ He also paid warm tribute to the original creator of James Bond, Ian Fleming, and ended his contribution by saying: ‘Here’s to the next fifty years. Thank you very much’.

Later in the evening, the BAFTA ceremony saw Bond composer Thomas Newman pick up the award for ‘Best Original Music’ for Skyfall. Other Bond-related, but unsuccessful, nominations included Dame Judi Dench for her role as ‘M’, and Javier Bardem for his role as Bond villain Raoul Silva. However, the fact that Skyfall has achieved such prestigious and mainstream BAFTA recognition more than made up for any disappointment felt.

The next day (Monday, February 11), the British press gave extensive news coverage to the previous evening’s glittering ceremony, and many newspapers commented on the Bond success, with a number of journalists noting that, although the sky was very grey that evening, Skyfall was able to bask in sunshine.