From a View to a Thrill: B25 Jamaica shoot wraps 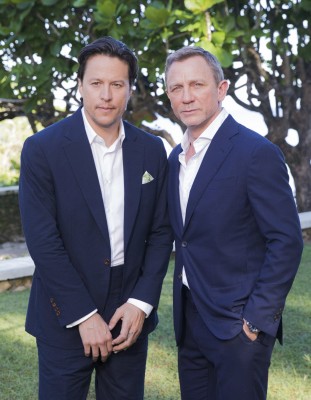 Its a wrap! The first stage of location shooting on Bond 25 has now been completed.

Employing a lovely photographic view of the Island, Bond 25 director Cary Fukunaga has revealed via his Instagram account that the Jamaica filming leg on the new 007 production has now come to an end.

The JBIFC’s man at Station ‘K’ in Kingston has been able to provide some outline details (Warning: one or two possible spoilers ahead).

The B25 crew spent two weeks conducting principal photography on the beautiful Island so beloved by Ian Fleming. As far as the JBIFC understands it, the original timetable of available shooting time had been scheduled for three full weeks, but filming has been smooth and relatively problem-free, and has very much gone to plan, enabling the crew to wrap things up in a timely fashion.

Despite claims in the media (especially in certain UK newspapers), there was a good atmosphere on set and the new director has handled everything with efficiency and aplomb. And Craig clearly relished his return to the world of 007. After the initial press launch held at Ian Fleming’s villa Goldeneye, the production quickly went to work, with some of the first scenes being shot in Port Antonio, on the north coast of the Island. Shooting days were quite long and tiring in the heat, but plenty of refreshments were made available for cast and crew to stay hydrated. 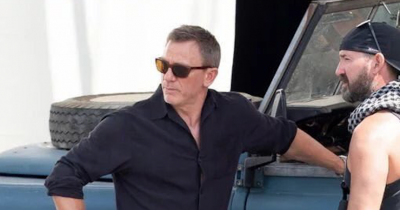 Bond star Daniel Craig was filmed driving an open-top Land Rover vehicle in the streets of a bustling market area. Craig’s stunt-double, Jean-Charles Rousseau, was also on hand for some key stand-in work. Fans were also delighted to see the first sightings at the same location of Jeffrey Wright, who is reprising his role as Bond’s old friend Felix Leiter, and was filmed joining 007 and his vehicle.

On day 3 of the first week of the Jamaican location filming, Craig and the B25 crew took to the water, with the Bond star sailing solo in a custom-built sail-boat. Further filming towards the end of week 1 saw Craig’s 007 indulging in some spear-fishing, which (interestingly) was a favourite past-time of the original creator of James Bond, Ian Fleming, when the best-selling author took his annual vacations on the Island. At one stage, Craig was filmed inspecting and gutting his catch on a wooden jetty by the water, and the fish was said to be a large Red Snapper, a small piece of which he gave to a cat (no, it was not Blofeld’s moggy!). 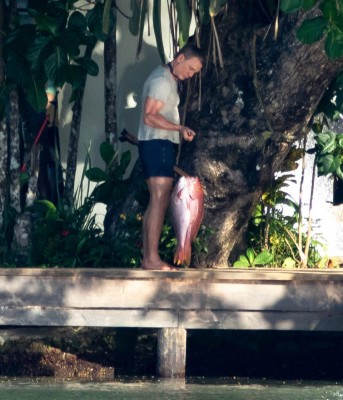 What struck lucky onlookers was how Daniel Craig’s fifth stab at the role of James Bond has evidently been tapping into the ‘Fleming’ dimension of the world of Bond, which is creating some nice synergy between the real-life world of the late Bond author and his fictional creation in both book and cinema form.

It would appear that the semi-retired James Bond of the early part of the new 25th 007 movie has been indulging in some very leisurely ‘Fleming-esque’ pursuits, such as fishing, swimming and sailing, the type of pursuits so enjoyed by Ian Fleming himself.

However, the old familiar 007 was also seen back in action (once a spy, always a spy), and Daniel Craig was filmed at another point making use of the local undergrowth, at one stage brandishing and aiming a handgun.

Week 2 of the Jamaican filming saw some further use being made of the local scenery, but mainly included some footage shot at Bond’s Jamaican house, a large wooden construction in a lovely coastal location, which had been put up by a busy carpentry crew over the last few weeks. This project also made use of some local Jamaican materials and labour skills. Unsurprisingly, curious members of the public were kept well away from the location, but interesting reports emerged that Swedish actor David Dencick, who is playing a villainous character named ‘Waldo’, together with actress Lashana Lynch, had been spotted in the area.

Jamaican Film Commissioner Rene Robinson has been very pleased with the presence of the B25 crew on the Island, and said the production employed the equivalent of about 1,000 Jamaicans in a variety of support capacities, which he told the local media was a ‘big deal’ for the Island’s economy.

Meanwhile, in a brief break before work recommences on B25, Bond star Daniel Craig flew back to New York for a short stay with his wife and baby daughter. Watch this space for further news as it develops. You know the name, and you know the number. 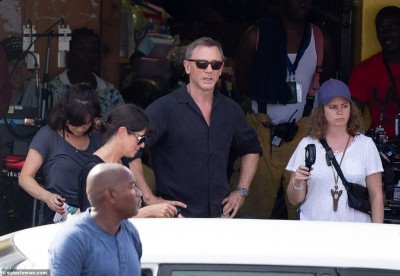 Daniel Craig stays cool in between B25 takes in Port Antonio