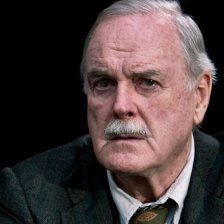 Former two-times ‘Q’ actor John Cleese, speaking as the famous Monty Python team embarked on their final reunion stage shows in London, has voiced some reservations about what he called the ‘humourless’ tone of the recent James Bond films.

Cleese, who played a trainee assistant to ‘Q’ in the 1999 007 adventure The World Is Not Enough and then assumed the full Quartermaster role in 2002’s Die Another Day (following the tragic death of Desmond Llewelyn in 1999), was speaking to the BBC’s Radio Times magazine. The 74-year old comedy actor was interviewed as part of a profile of the Monty Python team by the BBC’s listings magazine and, at one point, briefly offered his assessment of the recent direction of the Bond franchise.

He said he did two James Bond movies ‘and then I believe that they decided that the tone they needed was that of the Bourne action movies, which are very gritty and humourless’. He continued: ‘Also the big money was coming from Asia, from the Philippines, Vietnam, Indonesia, where the audiences go to watch the action sequences, and that’s why in my opinion the action sequences go on for too long, and it’s a fundamental flaw. The audiences in Asia are not going for the subtle British humour or the class jokes’.

Cleese has made various comments about the Bond films over the years, including on how he saw the role of ‘Q’. At one stage, in the run-up to Die Another Day, he said of his own interpretation of the character: ‘Q is someone who loves gadgets and is thoroughly irritated by Bond’s lifestyle and wishes that he would treat the gadgets much better. If Bond got killed in the process then, you know, at least the gadgets would be all right!’

Cleese, who describes himself as a ‘Writer, Actor and Tall Person’, in addition to recently working on the smash-hit Monty Python reunion show, has also been hard at work writing his memoirs, and has also just agreed to take a role in his first live-action movie for five years. He will appear as the villain in The B Team, a new movie directed by Chris Cottam, which will reunite some of the stars of the old Baywatch TV series, but with a comedy and espionage storyline. Production on the movie is expected to begin in Hungary in September.

The Monty Python team, which elevated the actor to worldwide fame, has just staged a series of sell-out live performances at the London 02 Arena (formerly the Millenium Dome, which was a key backdrop location in the pre-credits to The World Is Not Enough). The very last Python show, staged on Sunday July 20, was also beamed live to various cinemas around the globe.

Meanwhile, news has emerged that the current ‘Q’, actor Ben Whishaw, who played a younger and less irascible Quartermaster in Skyfall, and is due to reprise the role in Bond 24, has agreed to become the new voice of the iconic and much-loved children’s character Paddington Bear, after actor Colin Firth stepped aside from the role.

According to the UK’s Daily Mail newspaper (July 18), Whishaw, whose latest film Lilting opens in the UK on August 8, said he was called in to do the audition for Paddington Bear ‘quite out of the blue’ and, at first, was not keen to go: ‘I resisted a little bit, because I had a bad experience doing this kind of work in the past and I thought I was no good at it. But I was persuaded to go, slightly grudgingly’. But now he’s on board, he’s changed his view, especially as his 18-month old niece wll be able to see it and hear her uncle Ben’s voice.

Whishaw said recently that he’s really looking forward to reprising his ‘Q’ in the next Bond movie, which starts production in October.

The character of ‘Q’ (or, more accurately, the ‘Quartermaster’), as described in the original Ian Fleming 007 novels, can arguably be traced back to the Second World War. Fleming, who was an officer in Naval Intelligence during the war, often had to liaise with a highly-skilled inventor of secret gadgets named Charles Frasier-Smith, whose department supplied British agents with ‘special’ equipment for their missions behind enemy lines in Europe.

Some Bond historians believe that Fleming’s encounter with Frasier-Smith’s fascinating work may have been a big influence on his later creation of the ‘Q’ character in his James Bond novels.