Frayling writes on the Bond Villains 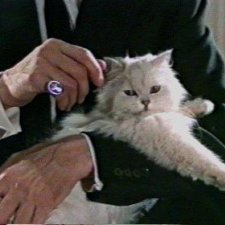 Bond expert Christopher Frayling has penned a new essay on the world of the James Bond villains: ‘No, Mr. Bond, I expect you to die’. The essay sets out Frayling’s thoughts on how the 007 villains have reflected the anxieties of their age, and how they will continue to do so in the future.

Written for the special summer edition of the UK’s New Statesman magazine (31 July – 13 August), Frayling’s essay starts by recalling how the very first Bond film, Dr. No (1962), nearly had the main villain replaced by a pet monkey in the first draft screenplay written by Wolf Mankowitz and Richard Maibaum (which, as Frayling points out, has become a bit of a distorted version of what was actually proposed).

Frayling notes how ‘Cubby’ Broccoli firmly rejected the ‘monkey’ plan contained in the first draft of the screenplay: the second draft of the treatment, dated 28 September, 1961, dropped the monkey and restored Dr. Julius No in all his villainous glory. As Broccoli said later, he was a great believer in not tampering with the original material i.e. in this case the highly distinctive villain of Fleming’s novel.

Frayling’s point is that Broccoli had great instincts and knew a winner when he saw one, and the villains of the James Bond books (and subsequent movies) were an integral ingredient of the general appeal of the world of Bond: we all love a good villain, and the EON films certainly gave us plenty of very memorable ones!

As Frayling also notes, Ian Fleming himself also had his finger on the common pulse in the 1950s: his books were a mix of kiss kiss bang bang, combined with larger-than-life villains. In developing his memorable baddies, the Bond creator also learnt from Conan Doyle, the creator of Sherlock Holmes; Doyle’s Professor Moriarty (the ‘Napoleon of crime’) had entered popular culture as a suitably charismatic adversary for Sherlock Holmes, and Fleming’s villains (such as Le Chiffre, Mr. Big, Hugo Drax, Auric Goldfinger, and – most notably – Ernst Stavro Blofeld) all gained a similar status and public popularity. The films pushed this to new levels, adding embellishments to our favourite villains. While we all root for our hero 007, there’s also a percentage of us that look forward to discovering the latest villain’s devious schemes and secretly relish how this forms a core part of the latest screen adventure. One of the pleasures of the Bond films is finding out how 007 will try and stop the villain’s grand designs.

Moreover, according to Frayling, many of the Bond films and their powerful villains have reflected the general anxieties of the times in which they were made: Dr. No coincided with early fears about the atomic age; similarly, in On Her Majesty’s Secret Service, Blofeld tried to use germ warfare; in The Man With The Golden Gun, Scaramanga operated within the context of a world energy crisis; and, in Skyfall, Raoul Silva employed hacking and cyber-terrorism – key anxieties in the 21st century.

As Frayling argues, the Bond formula has proved ‘extraordinarily resilient’, surviving self-parody and different Bond actors to become by far the most successful franchise in movie history. And Christoph Waltz, who plays Franz Oberhauser – the villain in the upcoming SPECTRE – looks set to create yet another highly memorable entry in the history of Bond film villainy. We can’t wait!

When the early treatment was being written for Roger Moore’s third Bond film The Spy Who Loved Me, the main villain Karl Stromberg’s side-kick ‘Jaws’ (played by the late Richard Kiel) was to have died. But the steel-teethed character proved so popular with test audiences, it was decided to let him live to die another day (so to speak).