Fly Another Way: Waltz by the Thames 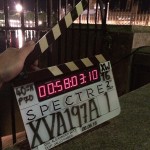 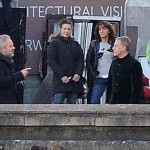 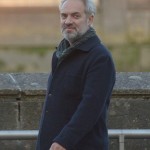 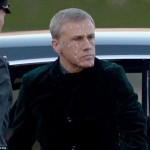 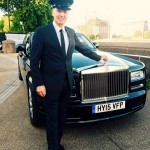 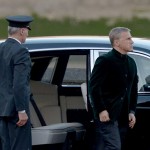 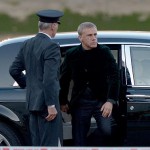 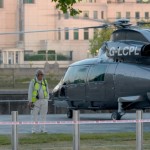 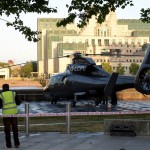 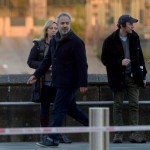 While one of the major highlights of the recent SPECTRE filming on the River Thames in central London was the presence of Daniel Craig and Lea Seydoux, together with some work by Ralph Fiennes, Naomie Harris and Rory Kinnear, another attention-grabbing surprise was the appearance (for one day only) of Christoph Waltz, who was seen on location for the first time and in character as the movie’s main villain.

Prior to this, Mr. Waltz’s filming duties for the new 007 adventure had been largely confined to working at Pinewood Studios, with just a couple of trips abroad. James Bond aficionados in Britain had thus been particularly keen to catch a glimpse of the highly-talented Austrian actor in action on location outside the confines of Pinewood. Just over a week ago, they were not disappointed.

The JBIFC’s operative on the ground in London has just filed the following brief report for M’s eyes only. Warning: There may be one or two possible minor spoilers.

Fly Another Way: Waltz by the Thames

After some location filming by Sam Mendes and his crew in the maze of London streets around the famous Guildhall on June 4-5th (see our previous exclusive report on this), filming activities for SPECTRE very much switched back to the River Thames area of the UK’s capital on the weekend evenings of both Saturday June 6th and Sunday June 7th. While the Saturday evening saw second unit filming activities, with a focus on obtaining more footage of Bond’s speed-boat racing along the Thames up to Westminster Bridge embankment opposite Parliament, the Sunday evening saw the return of Mendes and principal members of the first unit crew to the area.

On the Saturday afternoon and evening, the base of operations for the distinctive-looking Bond speed-boat was at Millbank Millenium pier, where the boat was also moored, with lots of film crew, assistants, security personnel and vehicles by the pier and in the general Millbank and Westminster embankment areas.

After a number of practice runs in the boat, the stunt doubles for Daniel Craig and Lea Seydoux (with him wearing his latex ‘Craig features’ mask and she wearing a special hair cover), took to the water for some main filming, with the boat followed by a camera boat at times and also by the camera helicopter. As per previous weekend shooting on the River, Bond’s boat was seen whizzing along from the Vauxhall Bridge (and MI6 HQ) direction, directly under Lambeth Bridge and on towards Westminster Bridge. Some footage was also captured of Bond leaping from the boat as it pulls up sharply and ascending some steep mooring steps that lead up the side of the stone embankment wall and up to the public path and steps located at the southern end of Westminster Bridge.

While some of this footage was very similar to what had been filmed on previous occasions, reports suggested that the Bond speedboat had developed a fault on an earlier weekend session and this meant that further work needed to be carried over into the weekends of June 6th-7th and June 13th-14th.

However, while all this was again fascinating to watch, for this author the highlight of the June 6th-7th weekend filming was the dramatic surprise appearance of Christoph Waltz on the Sunday evening for some helicopter filming. As soon as people realised who had appeared alongside Sam Mendes, a real ‘buzz’ went around some of the nearby observers.

During the late afternoon of Sunday June 7th, the dark-coloured helicopter with its large G-LCPL insignia, a copter used in filming on the Thames on previous occasions, had been parked on a patch of land on Millbank embankment, right next to Vauxhall Bridge and directly opposite the real-life MI6 HQ building on the other side of the Thames. There was a fair range of Panalux lorries and other unit vehicles parked along the Millbank embankment road, together with quite a number of security personnel in high-vis jackets. And then, in the early evening, a dark-coloured Rolls Royce Phantom drew up and parked not far from the motionless helicopter anfd out stepped none other than ‘Mr. Oberhauser’ himself – Christoph Waltz, who is playing the main villain in the eagerly-anticipated movie.

We’ve Been Expecting You, Mr. Waltz

Waltz’s driver for the day, dressed in a smart grey chauffeur’s uniform and cap, was veteran stuntman Paul Weston! Moreover, Waltz’s appearance gave onlookers some possible tantalizing clues as to what he will wear in the film and possibly about what he will look like: when he stepped out of his car Waltz was seen to be wearing a green velvet Bavarian-style jacket, and he had also been fitted with performance capture markers on his face, which look rather like white dots (we shall leave it to you to speculate what this might mean about his facial characteristics in the final version of the movie).

Waltz was greeted by director Sam Mendes and the two men walked over to the helicopter, engaged in conversation (undoubtedly about the impending filming that was take place later that evening). As soon as people realised who had appeared alongside Sam Mendes, a real ‘buzz’ went around some of the nearby observers. Indeed, word got around so fast that, at one point, a paparazzi photographer even took to a boat on the Thames and managed to capture some (very) long-distance pictures of Waltz with Mendes in conversation by the helicopter.

At around 8.00pm, the few nearby onlookers were politely asked to leave the Millbank embankment pavement area (and, at around the same time, one side of the public pathway over Westminster Bridge was also closed off). On Westminster Bridge itself and nearby, there was increased busy activity as the evening light turned into dusk and then full darkness. A powerful spotlight had been suspended  from a crane on a floating platform on the river, while numerous spotlights at intervals along both sides of teh Thames embankment were readied for action. As well as the usual barriers on both ends of the Bridge, three white gazebos (small pop-up marquee-style tents) and some side-panels had been set up on the pavement at one end of the Bridge in order to ensure greater filming privacy and to block any prying non-official camera lenses.

Later that evening, the Bond speedboat and camera boats turned up and got into position on the Thames, and members of the public were also eventually pushed right back from the Bridge. The Bridge was closed down from about midnight to approx 4.00am in the morning, and late Sunday evening and the early hours of Monday morning is probably the only time you can do such a thing in one of the busiest capitals in the world.

As part of the careful preparations for the ensuing helicopter filming, fire tenders sprayed a large amount of water on to the Westminster Bridge road in order to render a post-rain ‘wet’ look. It would be very unfair to go into further detail. Here’s one final observation about the evening’s dramatic events: the loud chatter of helicopter rotor blades and its engines roaring through the nightsky is something that remains in your head for hours afterwards. But it was still double-O heaven!