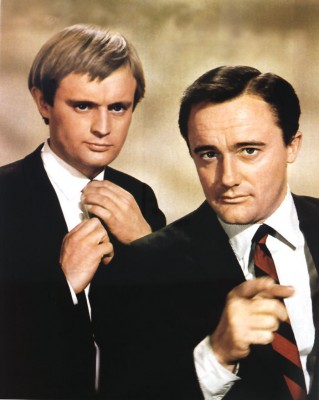 The influence of Ian Fleming’s James Bond on popular culture was enormous in the 1960s, and this could be seen in the numerous spy-related movies and TV series that all tried to cash in on the success of 007. ‘Spymania’ (as it was called) reached a new height in the middle of the decade with the appearance of The Man from UNCLE on American TV.

The new issue of the glossy James Bond fan magazine MI6 Confidential (no. 37) includes among its great range of articles a fascinating piece by Bill Koenig on ‘Ian Fleming and the Man from U.N.C.L.E.’, which explores how the Bond creator was a key influence on the cult 1960s American TV series, which ran from 1964-68.

Interestingly, the roots of this connection came from the Bond author’s non-fiction book Thrilling Cities, which had been looked at as a possible TV series.

According to the new MI6 Confidential article by Koenig, British-born TV producer Norman Felton had been approached with this proposal in 1962, but he had decided it would be difficult to make a television show out of Fleming’s book. However, Felton, who was always on the look-out for new concepts, at one point in the same year attended a breakfast meeting at an advertising agency, and floated his own idea of a man who performs special assignments for the Secretary-General of the United Nations Organisation (UNO). One of the attendees at the meeting suggested to Felton that the idea ‘was a bit like the Bond things’, and urged him to team up with the 007 author.

In late October, 1962, Felton thus arranged to meet Ian Fleming in New York, who did not seem – at first – all that enthusiastic. As Felton put it later: ‘I walked a lot with Fleming in New York because he had had a heart attack, and he was supposed to walk’. Fleming said he liked Felton’s idea, but the meetings did not progress very far.

Undeterred, Felton apparently borrowed a typewriter and typed up some notes on his idea to show to the James Bond author. Fleming now seemed to warm to the concept, and responded with some additional ideas, including naming the lead character ‘Napoleon Solo’. Fleming’s material also included a secretary named ‘April Dancer’, some descriptions of how Napoleon Solo worked for a mysterious organisation that was not affiliated to any particular nation, and some one-line ideas for possible episodes in the proposed TV series.

These intriguing connections between Ian Fleming and what would eventually emerge as the hugely popular TV show The Man from UNCLE are explored in entertaining detail in Koenig’s article, which will be of particular interest to those Bond aficionados who like to read about the 007 creator’s tentative dalliances with the world of television in 1962-63.

The new issue of MI6 Confidential (which has a superb Pierce Brosnan cover design) also contains much to please James Bond fans of all types, including an excellent profile of Bond Production Designer Peter Lamont, an article on Geoffrey Jenkins’ rejected manuscript for a Bond continuation novel (Per Fine Ounce), and a look back at the promotional tie-ins of the Roger Moore Bond era. 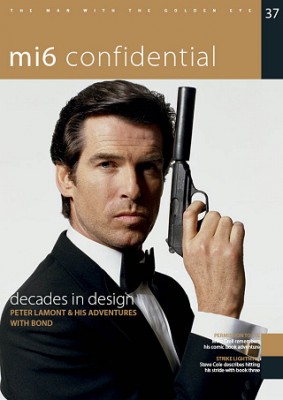 Cover of MI6 Confidential issue no. 37