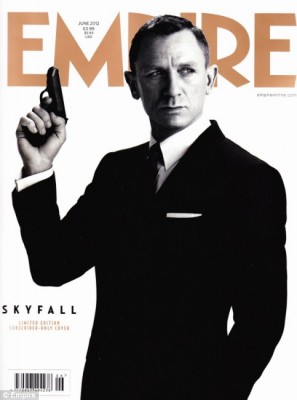 The new June 2012 edition of the UK’s ‘Empire’ movie magazine is both a ‘Skyfall’ special and a celebration of 50 years of the 007 film series.

The popular must-buy magazine, which has just hit British news-stands, has been issued under two different covers showing Daniel Craig in Bond pose, one version for subscribers only and one for the edition on sale in general retail outlets. The first article in the magazine, entitled ‘Defence of the Realm’, shows some beautiful stills from ‘Skyfall’, including a shot of Craig’s 007 standing thoughtfully on a rooftop looking out over the grey London skyscape, with Whitehall nearby and Big Ben in the far distance.

The article has comments and reflections from both the director Sam Mendes and from Craig, together with some asides from Javier Bardem and other members of the production. Interestingly, the article speculates that the movie’s villain is motivated by computers and the control of information, while at another point one member of the production comments that: ‘This whole film is about illusion’.

At another juncture in the same article Sam Mendes, reflecting on his experience so far as a Bond director, reveals that he’s had ‘an enormous amount of pleasure in making a

movie where I don’t feel like I’m having to walk a knife-edge between genres or shades of grey, which is what I’ve traditionally done. Thrills and action are what’s necessary here, and that’s what I intend to supply, as well as a kind of emotional engagement that maybe you haven’t seen before in Bond’.
Further treats for Bond fans in the new magazine include an article on the making of ‘Goldeneye’, a piece on Timothy Dalton’s re-invention of Bond in ‘The Living Daylights’ and ‘Licence to Kill’, an investigation of Roger Moore’s debut as Bond in ‘Live and Let Die’, a discussion of ‘On Her Majesty’s Secret Service’ and its status in the Bond series, and, finally, an exploration of Sean Connery’s very first Bond movie ‘Dr. No’. 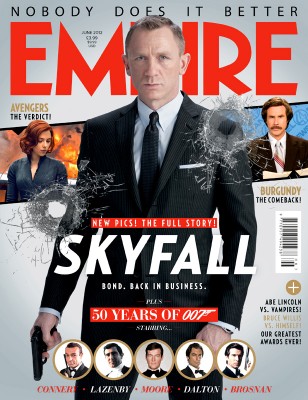