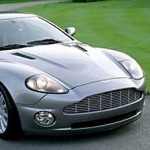 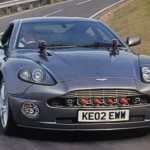 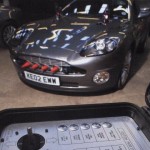 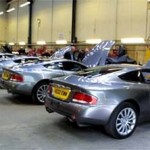 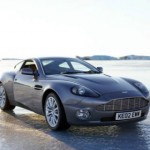 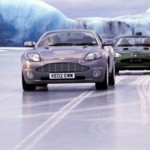 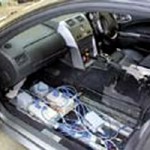 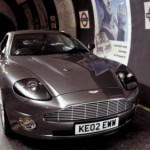 You’d better get out of our way…

‘We’re the first journalists in the world to drive the very special Bond Vanquish.’

The Aston Martin sits impassively on the Tarmac of the Millbrook providing ground in Bedfordshire, looking, well, like a stock Vanquish. Not one hint of firepower.

“It’s all under here,” Says the man from Aston Martin. He releases the bonnet. The hand-crafted engine lid lifts up to reveal a pair of Uzi-sized guns mounted just in front of the bulk head, “There’s more, look – rockets and a pair of machine guns behind the grille,”

The first Bond Aston in 15 years, the gunmetal grey Vanquish that is the mechanical star of Die Another Day packs four grille mounted rockets, two machine guns and two motion -sensing guns, all operated by nine controls. And all the weapons can be fired.

“What I like about the kit on these cars is that it’s real stuff,” says Nick Finlayson, who worked on the car. “We based it all on real rockets and guns. There aren’t any lasers. Lasers are boring.”

The Vanquish has just been back to Aston Martin for a few minor cosmetic repairs following the end of filming on the 20th Bond movie, and now its back in action-but not with stunt drivers or Pierce Brosnan (Who did do some stunt driving) at the wheel. We are the first journalists in the world to be allowed behind the wheel of James Bond’s latest car.

It is tempting to take the Vanquish out of Millbrook and pop up the guns behind the nearest white van driver. But the guns aren’t working at the moment and the vanquish isn’t road legal.

It’s lucky to be in existence at all. The four Astons were all Pre-production models and at least two are likely to end up as cheep razor blades.
The guns aren’t the only different thing under the bonnet. In place of the usual V12 lump is Andy Smith’s Ford V8 and Four – wheel drive system. It’s a work of art.

Right, this is it. I am under strict instructions not to exceed 50mph. The twisty. mountainous alpine course at Millbrook is my set….
Guns up, rockets out and machine guns at the ready, I slip into the cockpit. There’s only one seat. A full – on racing roll cage replaces the deluxe roof lining of the £159,000 customer version. Drag racing gauges have been stuck into the facia-a key to the race – bred V8 nestling between the motion – sensing guns. I Turn It. All Hell breaks Loose…

Not The Guns. It’s the engine-an almost unsilenced 5.0 – litre monster, awaking from the dead. This priceless Aston Martin sounds more like an old ford mustang dragster. But the deep throaty roar is enticement to ease the gearshift into drive. And put the boot in.
All four massive lumps of rubber grip the Millbrook tarmac and hurl the Vanquish forward. There might have been a squeal of tyres, but I can’t even hear my heart thump. Fifty miles an hour comes round in half a dozen seconds. And I’m not even trying.

I take a quick look round the dashboard and try to find a button with a gun on it or a rocket symbol. But there are none. The Vanquish Is a handful, but the four wheel drive hugs the tarmac like a affectionate sumo wrestler. I throw it at the scenery. but it doesn’t want to go there. I pretend I’m dodging bullets, but no amount of bobbing and weaving can make the Vanquish cower.

Hot and sweaty, with my eardrums hammered to a pulp, I hand the Vanquish back. It’s immaculate. Except for three bullet holes in the side.