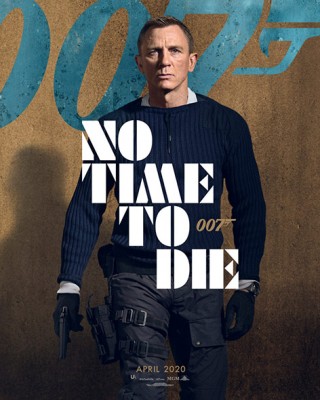 Double-O Heaven! Can you feel the excitement? Wednesday 4th December saw the eagerly-anticipated release of an official teaser trailer for No Time To Die, Bond movie no.25 in the smash-hit EON franchise, and – within just minutes – it rapidly became one of the most watched trailers on the internet.

It has beautiful cinematography and some suitably gritty Bondian action scenes, shot in Italy. Fans also gain a preview of some of the early Jamaican scenes, with Felix (played by Jeffrey Wright) speaking to Bond and a pensive-looking 007 standing alone at Bond’s beachside residence.

James Bond is also seen interacting with a new double-O agent (played by Lashana Lynch) and with Moneypenny and ‘Q’. MI6 chief ‘M’ is also heard wondering where Bond is and commenting on the pace of weapons being developed in the world.

We are also given a brief and intriguing glimpse of the return of (an imprisoned) Ernst Stavro Blofeld, who is visited by 007, and a teasing clue is provided about a secret still held by Madeleine Swann (played by Lea Seydoux).

And to wet our appetites even more, there is a first glimpse of the new villain, Safin, played with atmospheric darkness by Rami Malek. One can almost see the aura of evil that surrounds the latest Bond baddie, who has clearly been hatching a nefarious plan in traditional but updated Fleming style, and appears determined to make his mark on history. But, as Bond comments to him, ‘History isn’t kind to men who play God’.

Spoiler alert: In May, 2019, it emerged that genetics or some kind of genetic manipulation may be at the heart of the movie’s plot.

All in all, this is a great teaser trailer and shows, yet again, that Bond is well and truly back! You can view the trailer on the JBIFC’s Facebook site, on Youtube, or on the official 007.com site. Watch this space for further news developments as they happen. You know the name, and you know the number.