Double-O-Heaven: New Vlog on the Women in Spectre 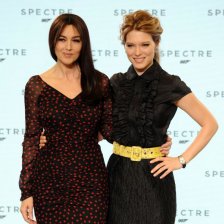 The latest official SPECTRE production Vlog, released on 13 August, provides some tantalising glimpses of the characters played by Monica Bellucci and Lea Seydoux, together with reflections on their roles by director Sam Mendes.

Bellucci, who plays the mysterious widow Lucia Sciarra in the new movie, is seen at one point talking to Daniel Craig’s 007 in the Italian cemetery chapel. She revealed about her character: ‘She’s an Italian widow with secrets. Her first husband was killed and she risks the same happening to her’.

Seydoux, whose character is Dr. Madeleine Swann, said: ‘She’s a doctor, she’s intelligent and a very sensitive and human character’. The Vlog shows brief shots of Seydoux on the train, and she is also seen running up some stone steps next to the River Thames, and then on to Westminster Bridge.

The new Vlog also includes some brief comments from Mendes, who reveals some of the rationale behind the casting of both Bellucci and Seydoux. He said he had instantly thought of Bellucci, 50, for the role of Lucia Sciarra: ‘It makes sense in the story. It makes sense with the ages of the characters we’re dealing with. She’s an incredibly seductive presence in life and in the movie and I’m thrilled she’s in it’. Mendes also said that, in terms of the two women 007 hooks up with in SPECTRE, ‘both have great mystery, they both have depths, and for that you need fantastic actresses. I just thought ‘Monica Bellucci’, you know?’ Regarding the role played by Seydoux, Mendes explained: ‘Madeleine needed to be soulful, feisty and complicated and I think it’s a pivotal relationship. It probably couldn’t be a total newcomer, it needed somebody with a bit of life experience and maturity’.

Meanwhile, in response to the release of the new Vlog, journalist Boris Starling penned an essay for the London Evening Standard newspaper (14 August), in which he noted that, with still two months to go until the new James Bond adventure is released, the 007 marketing juggernaut is already gathering momentum.

SPECTRE will be released in the UK on 26 October, and in the USA on 6 November.