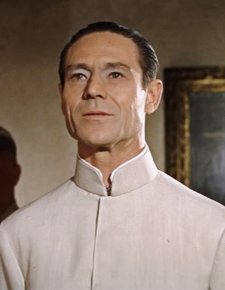 007 fans in the London area are in for a big treat this summer when some digitally remastered James Bond double bill screenings will be held in the capital, courtesy of the Vue Cinema chain.

Vue Cinemas will hold a short ‘Best of Bond’ season in June, kicking off on June 14 with a double bill of two classic Sean Connery Bond movies, Dr. No and Goldfinger.

For some Bond aficionados, especially those who missed out on the opportunity to see Sean Connery’s Bond in action in the famous double bills of the 1960s and 1970s, this will be a golden opportunity to see James Bond back where he truly belongs – on the big screen, and in beautifully remastered colour.

The season will also include some Roger Moore, Tim Dalton, Pierce Brosnan and Daniel Craig double bill Bond adventures. To help celebrate the new season, the JBIFC looks back briefly on Dr. No and the main villain who gave the film its punchy title.

In praise of ‘No’

Although the actor who played Julius No, stage and screen star Joseph Wiseman, passed away in 2009, there is general agreement that the multi-talented Canadian actor set the precedent for future EON Bond villains. His interpretation of Ian Fleming’s ‘No’ for the big screen gave the character a highly memorable machine-like quality, combining both menace and ego with a brief ironic nod towards culture and civilization.

With the creation of ‘Dr. No’ in 1958, Bond author Ian Fleming had embodied his villain with all the cruelty of a psychotic torturer but also with the trappings of a very modern villain, who had a particular fascination with science and technology. Wiseman, encouraged by director Terence Young, captured the essence of this very well, while the film-makers also came up with some inspired touches during filming.

After agent 007 (played by Sean Connery in his debut Bond film) – having been ‘decontaminated’ and temporarily drugged – finds himself now trapped in Dr. No’s multi-million dollar lair deep underground, at one point he spots Goya’s famous oil painting of the Duke of Wellington, and realises his dangerous host still has a taste for culture (of a kind).

This was also a great in-joke for early 1960s UK audiences, as the highly-valuable painting had recently been stolen in real life from the National Gallery in London’s Trafalgar Square!

The movie (released on October 5, 1962, at the Pavilion cinema in London) also had tremendous visual impact, undoubtedly aided by the hugely creative talents and eye for detail of set designer Ken Adam. Sir Ken Adam has revealed in recent interviews that he took inspiration for Dr. No’s HQ from some of the photographs of Nazi lairs published in the fashion and ‘style’ magazines of the 1930s, luxury lairs which combined a sense of evil menace with a backdrop of Germanic ‘culture’ (warm fireplaces, rugs on floors, classical oil paintings, expensive silver cutlery, and so on).

Even more successfully, the script for Dr. No was notably contemporary, and explored the villain’s plans to disrupt the American Project Mercury Space launch through ‘rocket toppling’, playing skilfully upon early 1960s ambivalence about science, atomic power and super hi-technology. What might now seem to a modern audience to be quaint and rather strange, with odd ideas about ‘atomic’ energy and satellite disruption, was – to a 1962 cinema-going audience – both exciting and also a little frightening, given the international Cold War tensions of the time.

But EON’s big screen version of Dr. No also gave audiences exotic adventure, colourful sunny locations and what seemed like (at the time) lashings of permissive sex. It also appeared to herald the beginnings of a new decade of optimism and consumer materialism, especially for British viewers after the rather drab years of the rationing of the 1950s and a series of recent gritty but bleak domestic dramas produced by British TV.

This new ‘modernisation’ also impacted upon how the main villain was perceived by the film-makers.

When the scriptwriters were putting together early drafts for the EON version of Dr. No, it was quickly evident that the screen interpretation of the character would have to be very different from the version in Ian Fleming’s original novel.

Fleming had described the half-Chinese, half-German Doctor as ‘at least six inches taller’ than James Bond, with an elongated head, completely bald, and wearing a kimono, who glided along like ‘a giant venomous worm’, brandishing metal pincers in place of his amputated hands.

Interestingly, this version was first given visual form in the Bond strip-cartoon series appearing in the UK’s Daily Express newspaper at the time. Fleming had also arguably taken some inspiration for the creation of Dr. Julius No from Sax Rohmer’s famous villain Fu Manchu, and apparently wanted his cousin, the actor Christopher Lee (of Dracula fame) to play the role on the big screen.

The EON version of ‘No’, however, was dressed in a relatively neutral fashion, with Chinese-style gentleman’s suit and metal hands instead of pincers. Although he was ambivalent about the role in later years, there is no doubt Wiseman’s interpretation contributed to what became the standard template for the strange and menacing Bond villains who appeared subsequently on screen. As John Brosnan noted in his early and affectionate study of the James Bond films, James Bond in the Cinema (1972), although Wiseman did not have much physical resemblance to the novel’s version of Julius No, on an emotional level Wiseman’s performance ‘was flawless’.

Reflecting on Wiseman’s portrayal, John Brosnan observed: ‘He captures perfectly the inhuman, machine-like quality of Dr. No. Every movement is careful and precise, the face remains blank and the voice as bland as a computer. The overall effect is one of supreme confidence mingled with total ruthlessness – the “Grand Inquisitor” of the novel’.

In hindsight, Wiseman’s performance, Sean Connery’s sheer energy and impact as 007, Ken Adam’s iconic sets, and Monty Norman’s immortal James Bond theme (arranged by John Barry), all combined to make Dr. No one of the truly ground-breaking films of the early 1960s, and certainly helped give birth to one of the most successful film franchises in cinema history.

President John F. Kennedy (a fan of Fleming’s novels, especially From Russia, With Love), had met the Bond author in March, 1960, and he once enjoyed a private screening of Dr. No at the White House, courtesy of United Artists.

Reportedly, From Russia, With Love was the last film Kennedy watched at the White House before leaving for Dallas in November, 1963, where he was tragically assassinated.