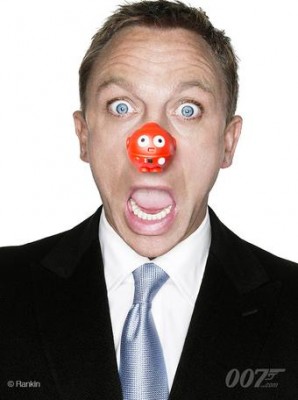 It was a case of double 007s when current James Bond Daniel Craig and past James Bond Sir Roger Moore starred in a hilarious special one-off sketch sequence on the BBC, screened twice during the evening on Friday 13th March.

The charity evening, ‘Face the Funny’, was held by the hugely popular Comic Relief charity, which has held a regular ‘Red Nose Day’ in the UK over the last 30 years, and helps raise thousands of pounds for those in need in both the UK and elsewhere around the world, especially in Africa.

This year’s event, which was broadcast live from the London Palladium in the heart of the UK’s capital city, raised a record £78 million, and this means that the charity has raised an astonishing £1 billion during its 30-year history. Among the highlights of the show this year were special sketches with Mr. Bean (Rowan Atkinson), the Vicar of Dibley (Dawn French), and the Little Britain star David Walliams (who starred alongside the eminent scientist Stephen Hawking in a sketch shot at Cambridge University).

And it was clear that all the participants thoroughly enjoyed themselves, getting fully into the spirit of the event. The specially filmed spoof 007 sketch, which was written by Walliams and the Dawson Brothers, saw a highly animated Daniel, complete with a dark bruise over his eye (an in-joke about his recent SPECTRE ‘injuries’!) explain some of his hurt feelings about how he had been treated in the Bond films.

Michael G. Wilson then revealed some exclusive footage from the pre-credits fight scene on top of the train in Skyfall, which showed conclusively that Daniel in real life sounds like a 9-year old female. It was also ‘revealed’ that Naomi Harris has also been heavily dubbed in the James Bond films, and in fact sounds like a male truck-driver from northern England. On the other hand, such dubbing is not new. Sir Roger Moore revealed how his own markedly ‘high’ voice had also been dubbed over by the film producers during his Bond films; a pre-dubbed scene from The Man With The Golden Gun (1974), where 007 confronts the villain Scaramanga over dinner on the island, was provided to illustrate this, and Roger clearly sounded like he was wearing his trousers too tight.

Using the famous ‘Bond, James Bond’ scene with Mr. White from Casino Royale, the Comic Relief film finally ‘revealed’ that Craig’s on-screen voice as 007 had in fact been dubbed for the film franchise by camp comic Alan Carr.

For those of you who perhaps don’t quite get the British sense of humour (!), just remember that this special film was one of the funniest sketches of the evening for the UK audience, who love Bond but also love it when actors can gently mock their own thespian seriousness in the name of an excellent charitable cause.

Speaking about the special film, Sam Mendes said: ‘I decided to take part in this sketch becaue the work that Comic Relief undertakes, especially in West Africa, for people whose suffering is beyond our comprehension is truly exceptional. Any help I can offer, even in the smallest way, is a privilege’.

Ben Whishaw, who played ‘Q’ in Skyfall and reprises the role in SPECTRE, explained: ‘When I first saw the script, I was returning home from the set, and it really made me laugh out loud. I was thrilled to be asked to be involved’.

Past Bond Sir Roger Moore, who is a past master at humorous asides, added that he thought viewers would most enjoy ‘seeing that old Bonds never die’!