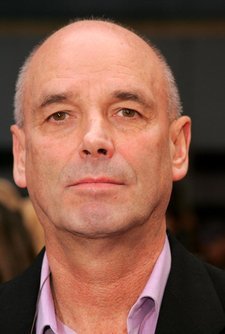 How time flies, Mr. Bond! It is amazing to think that Daniel Craig’s first 007 movie, Casino Royale, celebrates its tenth anniversary this year. Principal photography on the smash-hit film commenced in the Czech Republic in January, 2006, under the watchful eye of director Martin Campbell, and Craig’s debut adventure as our favourite spy received its Royal Premiere in London later that year, on November 14th, 2006.

Given all the speculation in recent months about who will direct the 25th James Bond movie – now that Sam Mendes has stepped aside – the JBIFC takes the opportunity to look back on Casino Royale and director Martin Campbell’s confident and assured helmsmanship of the 21st 007 movie.

After Goldeneye (1995), how did Campbell approach his second Bond movie ten years later, and develop the character of Ian Fleming’s suave hero in a fresh way? The film’s storyline was, of course, based on Fleming’s very first novel, the screen rights to which had recently come under the ownership of SONY and EON (a rogue, non-EON comedy version had been filmed back in 1967), but Campbell evidently relished the chance to help reboot the franchise in a truly radical way using original Fleming material.

Our brief retrospective is arranged under (00)7 bullet points.

001: The appointment of Martin Campbell as director of Casino Royale was announced well before a new James Bond actor was chosen and introduced to the world. After months of intense speculation and rumours about Pierce Brosnan’s future as Bond after four movies, EON producers Michael G. Wilson and Barbara Broccoli issued a press release in February, 2005, in which they announced that Martin Campbell, in his second time as a helmer of a Bond movie, would direct Casino Royale, the 21st film in the 007 franchise.

002: In their 2005 press release, the EON duo said: ‘We are thrilled that Martin has accepted our offer to direct Casino Royale. He is an extremely talented director and we believe he will help take our films in a new and exciting direction’. The EON pair also revealed that Campbell would be joining EON shortly ‘to work on the development of the script with our writers, Neal Purvis and Robert Wade’. The producers also added: ‘No decision has yet been made regarding casting for the role of James Bond’.

003:  The big challenge now faced by the EON producers and director Campbell, of course, was to find the right man for the role, somebody who could, in his acting, combine the necessary physical toughness with genuine emotional depth (Casino was, after all, a strong love story as well as a spy thriller). Unsurprisingly, there was a lengthy casting process, with Broccoli and the new Bond distributor SONY sometimes in evident tension over who would be a suitable candidate for Bond. Numerous actors were considered, and a gradual ‘narrowing down’ process ensued, with Campbell playing a key role alongside Barbara Broccoli. The candidates included Alex O’Loughlin, Sam Worthington, Henry Cavill, Goran Visnjic, and Daniel Craig. We now know that the last three names ended up on Campbell’s final list. Henry Cavill (the current ‘Superman’) came very close but, in the end, at 22 years of age, Campbell felt that Cavill was just too young. Craig, an older and more experienced actor, secured the part, much to the surprise of many at the time. The rest, as they, is history. A pairing of Craig’s sheer determination to succeed in the role and Campbell’s crystal-clear vision of Bond helped craft a superb ‘origins’ movie.

004: During later press interviews, though, given close to the movie’s premiere, Campbell admitted he was rather nervous about how the world would accept the new 007. Speaking in November, 2006, for example, Campbell – acknowledging all the initial controversy there had been over the choice of Craig as the new James Bond –  said: ‘Yes, I am nervous. Palms sweating. All of that stuff’. But he also explained: ‘It’s like that with any film, it doesn’t matter if it’s Bond or not, but probably more so as we have a new 007 and we’ve gone back to the book, of which there are many fans. So, with those changes, how the public will take it is going to be very interesting’.

005: There is also no doubt that Campbell was very pleased with how Craig had interpreted the role. In the same interview, Campbell – responding to questions about whether the actor was really up to the task of filling the most famous spy shoes in cinema history – asserted firmly: ‘Well, let’s say for number one, he’s a very fine actor. As the film is based on the book, which was the very first James Bond book, Daniel is very much the way Fleming described Bond. He’s a darker character in the book. He’s also a slightly more complicated person in the book. Daniel has a dark quality about him, which is interesting. I think Connery had that. It was one of the reasons for casting him [Craig]’. In Campbell’s estimation, Craig had the very same qualities: ‘Above all, he’s got rugged good looks, he’s very sexy’.

006: Similarly, it was more than evident that Campbell had a strong grasp and understanding of Bond history and the evolution of the character in the cinema. Asked for comparisons between his two Bonds, Brosnan and Craig, the New Zealand-born director commented thoughtfully: ‘You can’t compare them – they are so different. Pierce was absolutely fantastic in the movies that he did, which was very much the old template for Bond. They were broad, kind of fantastical, there was also some nutcase trying to take over the world – in the case of Goldeneye it was a ray-gun up in the atmosphere that wiped out all electronic data. But I think Casino Royale very much has its feet on the ground. Gone is the fantastical element, we’re much more into a real scenario, both in its action scenes and emotionally. The story itself is based in a reality much more so than previous Bonds’.

007: Although Campbell made it plain after Casino that he was not interested in returning for a third 007 movie, the sometimes blunt-spoken New Zealander has nevertheless often been asked about his views on the subsequent evolution of the Bond franchise, and occasionally he has given them.  A good example of this came in 2010 when, in an interview for London’s Time Out listings magazine (given to promote the movie version of his award-winning TV series Edge of Darkness), Campbell responded to a question about Sam Mendes who (at the time) was in the frame for Bond 23, along with writer Peter Morgan: ‘Sam will do a splendid job. I felt Quantum of Solace completely lost its way. We were lucky on Casino Royale, it was the origin story of Bond. Bond had the one and only affair that meant anything to him, and affected him throughout the rest of the series. I had sympathy for the writers after that because clearly the guy can’t have another meaningful relationship, he’s been f—-d over by the last one. But you’ve got to do something with the character, he’s got to go somewhere. I’m sure Sam and Peter Morgan will come up with something’.

In the early 1980s, Martin Campbell directed two critically acclaimed TV series, Reilly: Ace of Spies (1983), and Edge of Darkness (1985). Interestingly, Reilly starred Sam Neill, who was screen-tested a while later for the role of James Bond. At one stage, the Reilly series – which was about the career of real-life MI6 spy Sidney Reilly – made use of the Nene Valley Railway, near Peterborough, which was later utilised by Martin Campbell for a sequence in his first Bond movie Goldeneye. 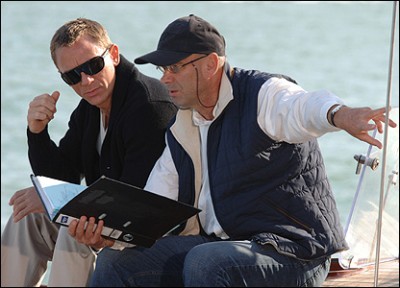 Craig with Campbell discussing a scene for Casino Royale