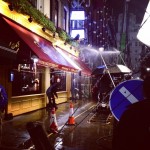 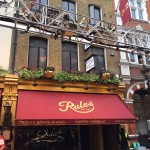 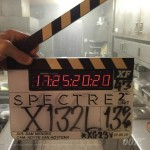 A key scene for the London-based stages of SPECTRE was shot at the famous Rules restaurant in the capital’s Covent Garden area last Friday (May 22), and involved  three members of the MI6 HQ team who provide support for agent 007.

Ralph Fiennes (‘M’), Ben Whishaw (‘Q’), and Naomie Harris (Miss Moneypenny), were all present for the sequence, which was shot both outside and inside Rules under the watchful eye of director Sam Mendes and the creative gaze of cinematographer Hoyte Van Hoytema.

For the after-dark outside scenes of the sequence, a large metal-framed structure was put up by members of the production crew in the street in front of the restaurant’s distinctive maroon-red external canopy, while a small camera rail-track was laid out at ground-level in the street, parallel to the main windows and entrance to the restaurant.

Ralph Fiennes was then filmed in character as ‘M’ walking and briefly standing outside the restaurant, looking quite testy as he shakes off rain from his umbrella, his image briefly reflected in the main window of Rules. The crew used a special sprinkler to cascade water on to the restaurant’s external canopy, creating the illusion of heavy rainfall coming down off the canopy and also in the main street.

Visitors and regular diners to the popular and exclusive restaurant, which is open from 12.00 midday-12.00 midnight seven days a week, were warned in a rather mysterious note on the Rules website a few days beforehand that the restaurant would be closed on both May 21st and 22nd due to ‘essential work being carried out in the kitchen’.

The day after the filming took place, EON released a new clapperboard photo from the kitchen on the official 007.com website.

The vintage restaurant, which is located in the narrow and atmospheric Maiden Lane in the heart of Covent Garden (and not far from the HQ of Mendes’s own production company Neal Street Productions), is said to be London’s oldest restaurant, having been established as far back as 1798 by Thomas Rule. In the over 200 years of its existence, Rules has been owned by just three families. The current owner, John Mayhew, took over the establishment in 1984. It can seat up to 90 people and has a large waiting staff, serving high-quality traditional British food and offering a wide selection of expensive wines and other beverages.

Framed illustrations of famous British politicians, playwrights, novelists and explorers adorn the stairwell of the restaurant, while other souvenir images and memorabilia from the literary, musical and acting worlds are located on the walls in various spots adjacent to the dining tables in the restaurant, which boasts private dining rooms and a cocktail bar.

The restaurant regularly attracts famous people from the nearby busy theatres of Covent Garden and surrounding areas. Interestingly, the establishment was once frequented by novelist Graham Greene and has also been regularly used by spy author John Le Carre. One famous composer, who particularly loved the traditional food and good wine on offer, was the late James Bond composer John Barry.

The SPECTRE filming was not the first time that Ralph Fiennes has been involved in filming at Rules restaurant. In 1999 an emotionally-moving scene from the romantic drama The End of the Affair was shot there involving Fiennes and his co-star Julianne Moore.

The movie was based on Graham Greene’s semi-autobiographical novel set in wartime London during the early 1940s.