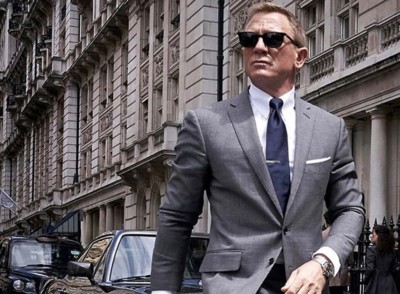 When you watch a 007 movie on the big screen in a cinema, you know that the architecture, artwork and design of the films have both reflected and influenced style and fashion for well over fifty years.

In fact, one of the essential ingredients of the EON James Bond series has arguably been the distinctive design aesthetic and the ‘look’ of many Bond sets, a style that – in many ways – was first pioneered by the late, great Sir Ken Adam, and whose influence can still be detected in recent productions.

Two art directors who worked on No Time To Die, Andrew Bennett and Neal Callow, who have helped maintain that legacy in Daniel Craig’s final adventure, recently spoke to the Big Issue magazine and reflected on their design work on No Time To Die: ‘Bond represents the current political, artistic, stylistic climate of the world’, said Callow. ‘Lots of the architectural language will have some of the spirit of previous Bond films but reworked in a contemporary way’.

He explained: ‘Our job as art directors – and that of anyone on the creative side of Bond – is to keep up to speed with developments and innovation in architecture, lighting, decoration. Absorb and amalgamate that with the kind of spirit of the legacy of the franchise’.

Bennett added: ‘We did make this film a couple of years ago but I’m confident it will look as fresh today as it did the day we made it. That is key in any Bond movie – it has that unique freshness and it’s timeless as well’.

According to both men, one of their big tasks on No Time To Die was to design the house in Jamaica where Bond had been living under the radar (so speak). The key question for the designers was, what kind of house would James Bond live in? Callow commented: ‘It’s more about the moment. A lot of Bond is about the actor playing him. So what state of mind is James Bond in, and what does Daniel Craig bring to James Bond? How can we represent that personality and mood, that moment in the life of James Bond, through architecture and design?’

In the film, Bond has retired from MI6 and has gone to get away from it all in Jamaica. The set decorating department had to be briefed on what the director Cary Fukunaga and Bond star Daniel Craig’s vision was for that moment. Callow said that, once that brief had filtered down, they tried to represent ‘the emotional place the character’s in through our design and decoration’. 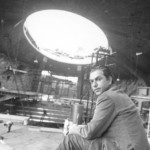 Concerning the design legacy of James Bond, Callow said Sir Ken Adam (who designed many of the iconic 007 sets, such as the sparse room in Dr. No from where Dent collects the spider, Fort Knox in Goldfinger, Blofeld’s volcano lair in You Only Live Twice, the Stromberg tanker in The Spy Who Loved Me, and the giant Drax space station in Moonraker) was the master of that design style: ‘He was half drinking in the most innovative ideas in art and architecture of the time, and the other half was about composing shots for film, using shadow and light and dramatic angles to frame the characters in a memorable composition’.

Callow said they tried to do that as much as possible ‘and pay respect to the legacy’. But it still had to be contemporary. One suspects that, had Sir Ken still been alive today, he would have immediately recognised how his original approach still remains something of a model for the new generation of set designers today.

Critics have praised No Time To Die for it’s crystal-clear cinematography and memorable set designs and, in many ways, the main villain Safin’s island lair very much taps into the distinctive set design style that has been such a feature of past entries in the EON series. 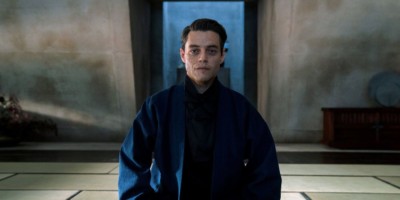