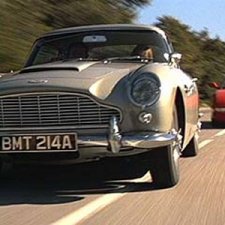 A journalist on a British national newspaper recently had the chance to road-test one of the two Aston Martin DB5s used in ‘Skyfall’.

Ken Gibson, who is part of the reporting team on the ‘Motors’ section of the UK’s ‘Sun’ newspaper, published his report on the unique experience on September 14, and also gave away a small plot spoiler.

As he noted at the outset of his report, ‘The Aston Martin DB5 is regarded by many as the ultimate James Bond car. Which is why 007 is reunited with a DB5 and even takes M for a drive in the Skyfall movie that’s out next month’.

Although the original 1964 DB5 in ‘Goldfinger’ came loaded with gadgets, Gibson noted that: ‘This time around the DB5 is gadget-free and although the script remains a well-kept secret, there is an explosive end for the Aston’.

Fortunately, Gibson revealed, he became one of the first people, apart from Bond, to drive one of the two models used in the new movie, and he said: ‘I took this Sixties classic down memory lane’. His report continued: ‘Despite being 48 years old, the striking DB5 is one of the few cars in the world that can put a modern Aston in the shade’.

In Gibson’s estimation, the DB5 has a ‘thoroughbred class’ that still turns heads when you drive through an English town: ‘Class ages but never dies’.

He also reported, with quiet satisfaction: ‘After spending just a morning with the DB5 it’s easy to understand why this car has played such a key role in the history of Aston and 007. It has an almost magical aura, like being in the presence of motoring royalty. More than enough to understand why the makers of Skyfall thought it was the only vehicle for 007 to drive and celebrate 50 years of Bond’.

From Beaulieu With Love

If you are a big fan of Bond’s Aston Martin, don’t forget there is still plenty of time to see the classic DB5 and other versions of the Aston at the UK’s National Motor Museum at Beaulieu, in Hampshire. As part of the special ‘Bond in Motion’ exhibition currently in progress, lovers of Bond’s wheels can see the DB5, the V8 Volante, the V12 Vanquish, and the DBS.

Numerous other Bond vehicles, boats and gadgets are also on display, and motorbikes from the Turkish sequences in ‘Skyfall’ were also recently added. Visitors are also greeted at the entrance to the exhibition with a trailer for the new Bond movie.