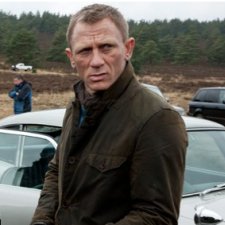 On the eve of the premiere of Skyfall, a new interview with Daniel Craig in a British newspaper has confirmed that the new Bond movie returns 007 to some of the more traditional ‘cinema’ elements that have made the character the timeless creation he is.

In an interview published in the weekend magazine of the UK’s Daily Telegraph on October 20, conducted by Vicki Reid last June (about a week after Craig finished filming Skyfall), Daniel looked back over his Bond career and offered some thoughts on his latest adventure as MI6’s best spy.

As Reid noted, Craig’s first two films as 007 were ‘quite dark’. Casino Royale had introduced Bond as Ian Fleming had originally envisaged him – a ‘blunt instrument’ (as ‘M’ once put it), who fell in love and was betrayed by the very woman for whom he was prepared to leave MI6. Similarly, Quantum of Solace told of the immediate consequences of this betrayal, ‘and was therefore essentially a revenge thriller’.

According to Reid, it was now time, Craig felt, to let loose some of the more traditional movie elements of the EON franchise: the wry humour, the gadgets, the over-the-top villains, all of which had appeared in the recent films, but which had been played down somewhat. Craig told Reid: ‘In my mind, if I ever had the chance to make more Bond films, I wanted the submarine base, I wanted the 20 karate-kicking girls – they should be there, they’re important. Not that we’ve got 20 karate-kicking girls. Sadly! But certainly the humour has come back in. It’s got some fun in it, but it’s not forced. I’m not winking at the camera. The writing’s really good, and I think that lends itself to humour…’.

Craig told the Telegraph that playing on the humour felt like a natural progression of the character. He admitted that when he was first cast as 007, he shied away from this aspect of past Bond incarnations: ‘I felt it was too soon; I didn’t want to repeat something that had gone before. I couldn’t just step into someone’s shoes; I would fall on my face really very quickly’.

At another point in the interview, Craig’s determination to do as many of his own stunts as possible was explored, something that started when he was originally cast as 007 in Casino Royale. According to Reid, Craig’s original reasoning was that ‘it was very important to get my face up there. Audiences know, they just know’.

Craig is a life-long fan of Buster Keaton and Harold Lloyd, ‘the early film stars who basically did everything’, and he was keen to emulate them in some way. The problem was, Craig had ‘hit this too late in life’. He said: ‘If I’d been doing this since my early 20s I would probably bounce a bit better than I do now’. He cited his stunt double, Ben Cooke,  and the stunt coordinator, Gary Powell, as giving him the confidence to tackle the more dangerous moves.

The Telegraph interview also noted how all three of Craig’s Bond directors – Martin Campbell, Marc Forster and Sam Mendes – all talk of Daniel’s total commitment to the film-making process. Mendes said: ‘He wants to be the engine room, he wants to be the motivating factor, he wants to be the person trying hardest. And I think it cost him a lot. He never complains about it, but you can see the toll it’s taking on him’.

The Skyfall director noted how, when Craig wasn’t filming, he would be rehearsing a stunt, or a fight, or on the motorbike. Mendes also commented about his Bond star: ‘There’s a fire inside him, and there aren’t many people who act who have that’.

Towards the end of the interview, Craig told the newspaper that, even though he considers making his third Bond movie ‘the hardest of the lot’, he genuinely enjoyed it: ‘We were prepped, we’re a strong team, all gunning for the same thing’. After Skyfall, Craig said he has no immediate plans, other than ‘just switching off, taking part in life’.

The premiere of Skyfall takes place on Tuesday October 23, and it goes on general release in the UK on Friday October 26.