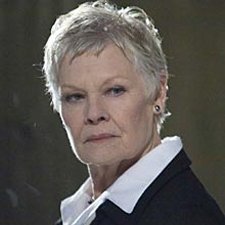 Dame Judi Dench, who reprises her role as 007’s MI6 boss ‘M’ in ‘Skyfall’, was interviewed in the magazine of the UK’s Sunday newspaper The Observer on October 14.

Dame Judi, who first performed for an audience an amazing 60 years ago, and is still going strong today aged 77, revealed that in the past six decades she has only twice had any time off from working: when she gave birth to her daughter, and when she was nursing her husband, Michael, who died of cancer in 2001.

The new Bond movie ‘Skyfall’ is the seventh time she has played ‘M’, but she would not be drawn on rumours that this will be the last time she actually plays the head of the British secret service, and that in the film she identifies her successor, ‘a shady Ralph Fiennes’ (who plays government man Mallory).

Dench told the Observer that she regards the role of ‘M’ as ‘great fun’, and she recalled playing with gadgets as M in her first 007 film ‘Goldeneye’ (1995), and how she became, as she put it, ‘completely drunk with power, because I can’t mend anything, or even put the ironing board up properly’. She said she still likes the fact that she can be imperiously bossy in the Bond films, but added quickly: ‘I would hate people to think bossy is all I can do’.

She said that she gets on well with Daniel Craig, and that she was thrilled to be directed again by Sam Mendes, who she first worked with on The Cherry Orchard twenty years ago: ‘You feel great when there is someone you trust there on the bridge, a firm hand’.Regarding her interpretation of the role of M, Dench said the character has developed ‘necessarily, just by the fact I have got older, and she has to work even harder to prove she is up to it…’.

When asked about her continuing compulsive drive to work, she said: ‘I just feel I have to keep doing it. I never want to stop. I need to learn every day’. Her next movie project is a film called ‘Philomena’, which will be directed by Stephen Frears, and is the true story of an Irish woman who searched for 50 years for her son, who wasborn illegitimately and was taken from her, and ‘sold’ to a wealthy American family.

Interestingly, Dame Judi’s caution when answering questions about M’s relationship to Mallory echoes some comments she made to the November issue of Total Film. On Ralph Fiennes’ character, Dame Judi would only say: ‘His role is bossy. Mine is a great deal bossier’.