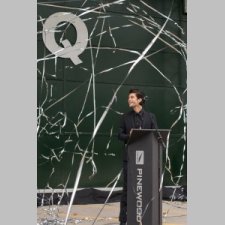 Actor Ben Whishaw, who became the new ‘Q’ in Skyfall and will reprise the role in Bond 24, has officially opened the ‘Q Stage’, a brand new building at Pinewood Studios, the traditional home of James Bond film-making in the UK.

The new hi-tech building is designed to boost the studio’s ability to provide an extra purpose-built facility for both film and TV production, and is part of Pinewood-Shepperton’s overall expansion plan to meet the growing demand in the UK for additional specialist production resources. The new ‘Q Stage’ was completed on September 27, and joins the famous 007 Stage at Pinewood, together with 007 Drive, Goldfinger Avenue, and Broccoli Road.

After some opening remarks at the ceremony by Andrew Smith, Director of Strategy and Communications at Pinewood-Shepperton, Ben officially declared the new ‘Q Stage’ open, and also unveiled the new ‘Q Stage’ sign which, naturally, is in the shape of a large and distinctive ‘Q’.

Among the guests who witnessed the unveiling ceremony were the James Bond producers, Barbara Broccoli and Michael G. Wilson.

The special event at Pinewood tops a very busy year for Whishaw. He is currently on stage in London in the critically-acclaimed play Mojo, which is about gang warfare in the Soho area of Britain’s capital city, and is set in the 1950s. The play has just had its run extended by another four weeks, taking it into January, 2014.

Whishaw also has a part in the new sea-faring movie directed by Ron Howard, In the Heart of the Sea,  which is based on the famous 1851 novel Moby-Dick.

Media reports also recently revealed that Ben has screen-tested for the role of Freddie Mercury in a new film about the legendary rock artist and lead-singer for Queen. Although Brian May, one of the original members of the famous rock group, has publicly expressed his wish that the role should indeed go to Whishaw, there is no confirmation yet on whether Ben has secured the part.

Meanwhile, the EON producers, who maintain an administrative office at Pinewood-Shepperton Studios and have built up a very strong relationship with the Studios over the years, will be honoured by the Producers Guild of America at their 25th Annual Producers Awards ceremony in the USA on January 19, 2014.