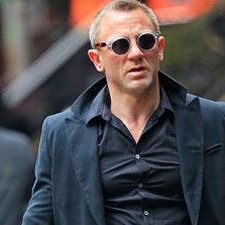 James Bond actor Daniel Craig spoke in the USA recently about his next acting project, made some rare comments about his life generally, and also provided some tantalising clues about Bond 24 in the process.

Interviewed with his wife Rachel Weisz by vulture.com for the New York magazine, the pair are getting ready to star together in a new Broadway version of the famous Harold Pinter play Betrayal, directed by Mike Nicholls, and also starring British actor Rafe Spall. Craig will take the role of Robert, while Weisz will play his cheating wife, Emma.

Craig said they had wanted to do a play together for some time: ‘It seemed like an obvious thing to do – if it feels stunty, it wasn’t’.

At one point Craig, who married Rachel in a secret ceremony in New York in 2011, also said that the actress had changed him for the better, and revealed: ‘I’m far happier than I have been for many years’. He added: ‘I think finding the right person and being with the right person is probably the answer to most things’.

He also offered a recipe for marital bliss, saying: ‘There’s nothing technological allowed in the bedroom. If the iPad goes to bed, it’s a killer. We have a ban on it’. Battling technology taking over one’s life, he said, ‘is a good fight to have, as far as I’m concerned’.

The interview also turned at one stage to Bond 24, which is being written by John Logan and will see the return of director Sam Mendes. At the end of the 14-week run of Betrayal, Daniel will start preparatory work on the next 007 adventure.

Craig’s interpretation of Bond will apparently build on the reborn Bond seen at the end of Skyfall. He said: ‘Hopefully we’ll reclaim some of the old irony, and make sure it doesn’t become pastiche. I can’t do shtick, I’m not very good at it. Unless it kind of suddenly makes sense. Does that make sense? I sometimes wish I hammed it up more, but I just can’t do it very well, so I don’t do it’.

Advance bookings for Betrayal in New York suggest the play is already a theatre box-office smash-hit.