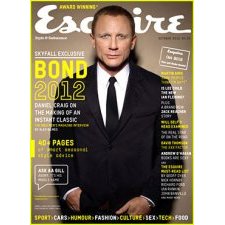 An interview with James Bond star Daniel Craig has appeared in the new edition of ‘Esquire’ magazine, which is now on sale.

Daniel also appears on the front cover of the magazine, which has just hit the shelves of newsagents in the UK, and there is also an on-set report put together when ‘Skyfall’ was being shot in Turkey earlier this year.

In addition, the new issue of ‘Esquire’ has a preview of the exciting new book ‘All About Bond’, which brings together some of the fantastic 007 photographs taken by the legendary photographer Terry O’Neill throughout his career.

In the main interview, which was conducted last June in a north London pub, Daniel Craig reflected on both his first and second 007 films, on the possible general appeal of James Bond as a character, and on the ‘darkness’ to James Bond. He said: ‘I think what’s always fantastic about the Bond stories – and they have retained it, though they might have lost it for a while – is that there’s always a darkness involved, but it’s a darkness with a sense of humour. A black humour. It’s about danger, but good danger…’.

Touching on the core themes at the heart of the story in ‘Skyfall’, Craig also said at another point: ‘It’s about who Bond is, but first and foremost who M is. What she represents as the head of MI6, her morality’.

Craig also offered some information on his role in the pre-production of Bond 23 and how ‘Skyfall’ was able to attract such an accomplished supporting cast: ‘I had no major game plan coming to this, but in the back of my mind, I thought if we can get the right writer and director, and get the script right, then we can attract those people. Then when Sam (Mendes) came on board and we got the script, and then every single number one on our list said yes, that gave us a real boost’.

Elsewhere in the interview, Craig confirmed there will be nods to James Bond’s past in ‘Skyfall’, such as the return of the famous Aston Martin and suits that are reminiscent of the Sixties Bond. He said: ‘It all comes from the same place, which is that as much as possible we wanted to give the audience our take on classic Bond’. Interestingly, towards the end of the interview, it is also revealed that Craig has already signed on for two more James Bond movies.