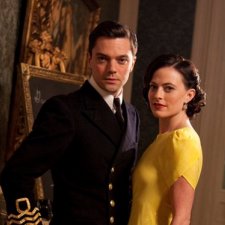 The recent U.S. TV premiere of the new four-part series on the life of Ian Fleming has seen a wave of new articles on Fleming and Bond. Now British TV magazines have also turned their close attention to the new biopic, which starts screening for UK audiences on Sky Atlantic on Wednesday, February 12.

Unsurprisingly, much of the UK coverage has been devoted to the life and career of the show’s main star, Dominic Cooper, but there has also been some interesting discussion of the life of Ian Fleming and his similarities (or not) to his famous fictional creation James Bond. It is clear that Cooper has thought hard about the extent to which Fleming possibly blurred into Bond.

The BBC’s Radio Times TV listings magazine (February 8-14), for example, carried a 3-page article on ‘The man behind Bond’, where Cooper was interviewed by Craig Mclean, in the bar of Dukes of St. James, in London (which used to be a favourite haunt of the real-life Bond author).

The 35-year old actor, whose breakthrough role in the UK was in the acclaimed Alan Bennett play The History Boys (later turned into a smash-hit movie), spoke about the challenges he faced playing the famous Bond author. Cooper told the Radio Times: ‘With Fleming we’re looking at a man we know something about. And we are all aware of the iconic character he created. But what I found revealing is that the character of Bond is what the author saw himself as being. Bond is Fleming’s idealised version of his own personality’.

And this is apparently what shaped Cooper’s approach to the new TV series. Cooper explained: ‘There was a certain amount of relief, having spoken to the producers and the director, that actually what we could make is a version of his life that Fleming thought he had. I think sometimes, with biographical pieces about a famous person, or someone that we know, we expect them to have had an entirely entertaining and thrilling life’.

Cooper also commented: ‘You have to make a decision on how you want an audience to perceive this person. He was a very melancholic figure, I think, and never reached where he wanted to be as an author’. Also, reflecting on the big-screen Bond and the recent box office success of Skyfall, Cooper suggested: ‘If there’s that much excitement, still, about this character, people must want to know about the man who created him. I hope!’

ITV, the BBC’s rival TV network in the UK, also featured the new TV series in it’s weekly TV listings magazine TVTimes (February 8-14), with a 2-page article entitled ‘The name’s Fleming…’. This consisted of the results of an interview the magazine had conducted with Cooper while he was shooting the series on location in Budapest.

At one point, Cooper, referring to his interpretation of the Bond author, said: ‘I think it will shock people. He was quite a dark man and his sexual relationships were ambiguous and dangerous. There’s a sinister side to Fleming and it can be difficult to sympathise with him’. Cooper added: ‘We investigate why he was the man he was. He had a very complex relationship with his mother and was extremely competitive with his brother, which made him feel like a failure. Actually, World War Two was the making of him’.

Cooper also revealed some of the initial trepidation he felt at playing Ian Fleming, admitting it was a daunting task playing such a celebrated writer: ‘I knew very little about him, so I went into a mild panic at first. There was a lot of pressure as I felt a responsibility to the man and the people who knew him, but I also thought I had to create someone who would be enjoyable to watch. We have taken some liberties but he does have an amazing story to tell’.

His word is his Bond…

Another magazine in the UK which gave interesting coverage to the new Fleming biopic was Total TVguide (8-14 February), which had also tracked Cooper down while he was filming in Budapest (at the Petofi Literary Museum, which doubled as London’s famous Dorchester Hotel). Entitled ‘His word is his Bond…’, the magazine’s interview with Cooper also asked the young actor about his interpretation of the Bond author.

In truth, said Cooper, he was trying to play Fleming as the man ‘believed himself to be, because there is an element of Bond in him, and that’s what will make it exciting for the audience’. Moreover, Cooper argued, providing Fleming with James Bond’s rakish wit provides an element of relief: ‘Fleming was a very brutal man and a lot of things he does are quite awful, so I think there needs to be some charm and lightheartedness’.

Cooper also made similar comments to the UK’s cable TV listings magazine TV & Satellite Week (8-14 February), which also put the actor on its front cover alongside Lara Pulver, who plays Ann, the woman who eventually became Fleming’s wife. The magazine’s 2-page article noted that, although the Bond author always denied that his most famous creation was based on himself, the new biopic finds striking similarities between the two men.

At one point in it’s article, the magazine asked Cooper about Fleming’s wartime activities: ‘The war absolutely was the making of Fleming’, explained the actor. ‘Before then he was on a steady path to nowhere’.

After being kicked out of Sandhurst and making a poor job of being a stockbroker, salvation unexpectedly arrived for Fleming (with a little help from his well-connected mother) in the form of a job offer from Naval Intelligence and its director, Rear-Admiral John Godfrey (played by Samuel West). Cooper explained: ‘Fleming had this anger, this dark side and a vivid imagination that previously he hadn’t been allowed to explore. The war unlocked them and gave him confidence that he could achieve something’.

This led to Fleming dreaming up ingenious intelligence operations and promoting the use of Bond-style espionage gadgets, which undoubtedly influenced his later 007 novels. Cooper commented: ‘Bond was a glamourized version of who Ian Fleming thought he was’. And, since Fleming was a rather unappealing character in real life, his portrayal in the new drama series leans more towards the idealised version of himself. Cooper admitted: ‘It’s much more the idea of James Bond than the idea of Ian Fleming’.

The new four-part biopic Fleming will receive its UK TV premiere on Wednesday, February 12, at 9.00pm on Sky Atlantic.