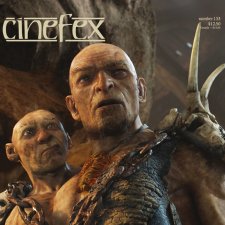 The new issue of the American magazine Cinefex (April, 2013), which celebrates the world of special and visual effects in movie-making, contains a detailed article on the production of Skyfall.

The magazine, which has just appeared in retail outlets on both sides of the Atlantic, has an article entitled ‘Old Dog, New Tricks’. Written by Joe Fordham, the glossy and very informative 28-page Cinefex article is a must for all those who are fascinated by the sheer hard work and imagination that goes into the creative and technical side of making a James Bond film, and there are numerous photos taken both on the set and behind the key scenes during the production of Bond no. 23.

Featuring interviews with many of the members of the special and visual effects teams who worked on the movie, Fordham’s article is accompanied by more than 30 full-colour behind-the-scenes photos and film frame clips, many of them exclusive to Cinefex magazine.

The two men set up a miniature pyrotechnics test site at Longcross Studios, while production designer Dennis Gassner built the majority of key sets for Skyfall at Pinewood Studios. What becomes clear from the article is that director Sam Mendes was very keen to brainstorm new techniques with his effects teams and also with his stunt coordinator Gary Powell. Mendes also made Chris Corbould the second unit director for the train crash and helicopter sequences in the movie, which showed the level of confidence Mendes had in his effects team.

Corbould told Cinefex: ‘Sam Mendes agreed that there should be a big, jaw-dropping moment during a chase in the London Underground. I came up with the idea for the Tube train crash, which Sam liked a lot, but then I started to realize the enormity of what I’d dreamt up’. The article reveals how Corbould and his team then went about putting this ambitious sequence into practice, using specially-constructed carriages.

Various other fascinating facts emerge during the course of Fordham’s article, including how the explosion and its aftermath were created for the scenes at MI6 HQ. For the aftermath of the explosion, for example (seen in a television news report in the final movie), stock footage shot from a real-life helicopter overflying the Vauxhall Bridge HQ was manipulated.

There is also some interesting information about how Dennis Gassner’s team built the Skyfall Lodge at Hankley Common, in Surrey, and how a large amount of digital environment work was carried out to integrate this with shots taken on location in Scotland.

All in all, Fordham’s article goes through all the key technical and creative stages involved in the making of Skyfall, which will be of great interest both to 007 fans and to general students of special effects in the movies.

Chris Corbould pointed out to Fordham that, ultimately, all the technical dexterity used on the film was in the service of a gifted filmmaker, Sam Mendes: ‘What Sam brought to it was a great storyline and great characters, and I was really intrigued by the way our action merged with that’.

Cinefex has been very generous to Bond fans in the past. Issue no. 108, for example, featured in-depth coverage of Casino Royale, and issue no. 116 gave similar comprehensive treatment to Quantum of Solace.

The April, 2013, issue of Cinefex (issue no. 133), is on sale now, both in the USA and UK. It is available in three formats – print version, online version or iPad edition. Visit: www.cinefex.com