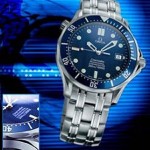 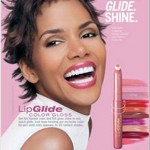 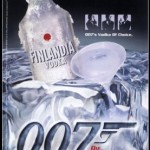 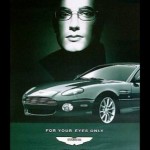 007, secret agent, licence to shill, as the moneyraker

The name is Bond and he really is the business “big business.” 20 advertising companies paid a record $120 million to have their products featured in the last James Bond film Die Another Day. Only the Olympics could boast more “official” sponsors.
From Ford to Revlon, Kodak to British Airways, it seemed everyone wanted a slice of the action. Product placement is growing and there can be no better way to showcase your goods than in a Bond movie.
The most successful film franchise ever having grossed more than $8 billion at the box office over the last four decades. The three previous films of the series earned more than $1 billion between them.
Die Another Day took $47 million on its opening weekend and has become the biggest 007 money spinner to date.

Bond is a global icon and his universal appeal to male and female, young and old, makes him such a marketable commodity. That is why advertisers are prepared to pay such huge sums to get their products promoted on a worldwide screen. Steve King a brand consultant said “One of the unique things about cinema is its global appeal which means advertisers get the reach they cannot obtain elsewhere.”

Every Bond film comes with products and marketing tie-ins, but some argued that Die Another Day became “a giant advert”, due to the excessive amount of product placement in the film. The spy has always been the victim of marketing exploitation, but has advertising started to overwhelm artistic content?

Ford Motors reputedly paid a staggering $35 million to overtake BMW as the official Bond car. BMW cars featured in the three previous Bond films, but Ford spared no expense in reclaiming its place. Three of the film’s main characters all drove a Ford vehicle and several other Ford cars also appeared in the film. There was a TV advertising campaign for the Jaguar XKR, driven by the villain Zao, which showed clips of the film and encouraged viewers to go and see more of the car in Die Another Day. Samantha Hoyt of Ford global marketing said “The James Bond franchise is unique because it’s well loved by all ages.”

British Airways, the “official” airline for the franchise, cashed in on the release of the movie with its own multimillion-dollar campaign “Save your moneypennies,” through sweepstakes, magazine and internet advertising. In the film, Bond reads a copy of the airline’s in–flight magazine High Life, while naturally travelling first-class. Amy O’Kane, of British Airways marketing services said “The biggest risk was to over-commercialise, the last thing MGM wanted to do was turn a Bond film into a 2-hour commercial.”

But are some of the authentic Bond characteristics being sacrificed for the sake of appealing to a younger, consumer brand, image conscious audience?

Bond even changed the brand of his unmistakable “shaken but not stirred” vodka martini. Finlandia Vodka replaced Smirnoff as 007’s favourite tipple. Scott Reid, global marketing director for Finlandia said “Finlandia is the true global brand with 80% outside the US,” he added “Finlandia fitted perfectly with the Bond image and ice-theme in the film.”

In the last adventure, Bond’s Rolex watch was confined to the dresser; instead he sported an Omega Seamaster. Omega has become 007’s preferred choice of telling the time since 1995. There was a limited-edition 40th year anniversary 007 Seamaster watch and a special promotion aimed at film-goers, when they purchased a ticket. Robert Emmons president of Omega said “Bond has had a remarkable impact on the sales of Omega watches. People respond to Bond and want to own something that he has.”

It was just not Bond been used as a marketing tool; his female co-stars were generating extra advertising revenue as well. Cosmetics Company Revlon introduced a range of make-up kits to tie-in with the release of Die Another Day. “The Look of Jinx” and “The Look of Miranda Frost,” were named after two of the agents in the film. Revlon also released “The Looks of Bond,” inspired by four previous different 007 films.

Other well known brands that featured in the film included Samsonite, Kodak, Calvin Klein, Norelco and Sony Erricsson. Such is the success of any commercial spin-off related to Bond that brands whom did not even appear in the film still promoted it.

Energizer batteries ran a Bond-themed sweepstakes and 7 Up used the “007” logo on millions of soft drink cans. Jim Trebilock, senior vice president of 7 Up said “Anytime someone drank a 7 Up, they saw James Bond.” Mattel the toy manufacturers released a 007 gift set, with Barbie as the Bond girl and Ken the secret agent. And to commemorate the Bond series, Swatch introduced a collection of 20 themed watches.

Bond is of course MGM’s baby and having spent $30 million on advertising to promote Die Another Day, they were taking no chances with the potential success of their most precious commodity. Each Bond film earns a pre-tax profit of more than $100 million in commercial sales. “The value to MGM is obvious,” said analyst Jeffery Logsdon, “there are a lot of very successful films in their library, but none quite as profitable as James Bond.” Robert Bucksbaum, president of Reelsource Inc., went as far to say “Without the Bond movies they would be out of business. I don’t see how they could have lasted as long as they have. It’s the one consistent winner they have had over the years.”

Every film studio is on the lookout for the next big franchise, as the rewards on offer are astronomical, only Star Wars comes close to the success of Bond. The action-hero movie series is extremely profitable in terms of commercial spin-offs, as they have a steady stream of marketable characters and possible sequels. Sony Pictures Spiderman is now the latest money spinner. The first film of the series hosted an array of brand promotions, worth millions of dollars. One scene in particular featured ads for Cingular Wireless, Kellogg, Hershey, Samsung and United Airlines.

It’s inconceivable any franchise will be quite as enduring as James Bond. But where is product placement heading? As the worlds’ obsession with “I must have that,” increases, so the advertising men will keep ploughing millions in to satisfy that demand. The competition for “showcasing” goods in a “big” feature film is fierce, as they are viewed by a global audience.

In Die Another Day, it may have been a case of commercial overkill, considering the first James Bond Dr No, only featured ads for Pan Am, Red Stripe and Smirnoff.