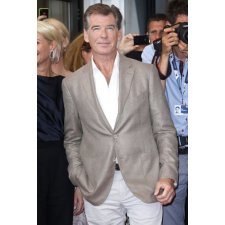 Former James Bond actor Pierce Brosnan, who has recently been publicising his new romantic movie Love Is All You Need, has said that his time as 007 was ‘one of the most rewarding roles’, and also praised the work of his successor as Bond, Daniel Craig.

Interviewed while promoting his new film, which co-stars Kim Bodnia and went on general release in the UK on April 19 (and has received very good reviews from British critics), Brosnan looked back on his film career and, at one point, said of Bond: ‘That was without question one of the most rewarding roles. That character, and the opportunities it gave one. That job is the gift that keeps giving because once you’re a Bond, you’re a Bond for life’.

Brosnan, who played James Bond in four films (1995-2002), also praised Daniel Craig’s work, and said the actor who succeeded him as 007 is ‘doing superbly well’.

In another interview, given to the BBC’s Radio Times magazine, Pierce also made similar comments. He said Craig is a friend and is a ‘brilliant’ Bond. The character of James Bond, added Pierce, and the legacy of his own time in the tuxedo and driving the Aston Martin DB5, is still with him.

He said: ‘Bond is the gift that keeps on giving. It was a monumental part of my career – I’ll always be grateful for the opportunity to play Bond and I loved playing him. Really, who wouldn’t? It’s a small group of men who have played him and I’m very proud to be one of them. But once it’s finished you have to look in other directions and you have to move on. Bond allowed me to go forth as an actor and play the characters that I do now’.

In another interview, given to the London Metro newspaper, Brosnan pointed out that Bond had allowed him to start up his own production company as well as take on a variety of film parts. In fact, post-Bond, Brosnan has relished taking on vastly different roles, such as his part in the political thriller The Ghost and his taste of singing in the musical Mamma Mia!, and he remains as busy as ever.

He recently finished filming a comedy, Love Punch, with Emma Thompson, and he will also play a disgraced TV personality contemplating suicide in A Long Way Down, based on the best-selling Nick Hornby novel.

Brosnan also told both the Radio Times and Metro that he also hopes to work with his son, Sean, on The Ghosts of Belfast, an adaptation of Stuart Neville’s thriller, set in the aftermath of Northern Ireland’s ‘Troubles’. It is about a man released from prison, who has to deal with the venom of the past.

The question of his long-planned sequel to The Thomas Crown Affair, the very successful heist thriller he made while he was still 007, has also been raised again while Brosnan has been publicising Love Is All You Need.

According to the Press Association (April 21), the actor, who is about to turn 60, said he would still consider making the sequel, but he also admitted that it is now ‘highly unlikely’ the sequel will come to fruition.

Brosnan said: ‘Thomas Crown 2 is dormant and has been for some time. It’s highly unlikely. I think we would have done it by now if the timing had been right. It’s just one of those things’. However, he also would not rule it out completely, saying there is ‘constant dreaming’ and he still wanted to make more films.

The follow-up to Thomas Crown has apparently been in development since 2007, when the sequel was reported to be based on a remake of the 1964 movie Topkapi. At one point, the director Paul Verhoeven was even attached to it, but left the project in 2010.

Meanwhile, Brosnan is returning back to some rather familiar territory: he has a new spy movie in the pipeline. He is due to start filming the espionage thriller November Man later this year, which is based on the novel There Are No Spies, by Bill Grainger.  Location shooting on the new movie will include Serbia.

Moreover, his new co-star will be none other than Olga Kurylenko, who starred alongside Daniel Craig in Quantum of Solace.