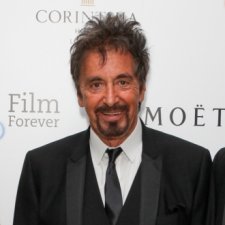 There was an intriguing bit of tongue-in-cheek speculation last week about a possible villain in a future 007 movie. According to a press report in the UK, actor Al Pacino, who was honoured with a British Film Institute (BFI) Fellowship on Wednesday 24 September, responded positively to the idea of having a role in a future James Bond film.

The 74-year old actor received his BFI award at a special evening dinner and ceremony held at the Corinthia Hotel, just off Trafalgar Square in central London, which was billed as the Al Pacino BFI Fellowship Dinner. The Fellowship is the BFI’s highest honour, and was given in honour of Pacino’s achievement in film. He was presented with the award by BFI chair Greg Dyke and CEO Amanda Nevill.

Pacino said he was ‘overwhelmed’ to receive the award and he praised the BFI’s role in promoting the art of motion pictures: ‘The BFI is a wonderful thing, how it keeps films alive’. He said receiving the Fellowship, previously awarded to such eminent movie figures as Martin Scorsese, Orson Welles, Dame Judi Dench, and Ralph Fiennes, was a ‘great honour’. He also made it clear in his acceptance speech that he feels that movies should be seen on the big screen, not on mobile phones: ‘I think if you put any movie on a big screen I will love it. Who wants to watch movies on an iPhone? I’m so tired of that’.

Interestingly, among the audience of celebrities and special guests from the movie world, was none other than Bond producer Barbara Broccoli, who posed at one point for a press photograph with actor John Hurt.

This gave an opportunity for London’s main evening newspaper to run a piece entitled ‘Al could be 007’s nemesis’. When the EON producer was cheekily asked by the ‘Londoner’s Diary’ columnist for the London Evening Standard if Al Pacino could ever crop up in the 007 franchise, Broccoli said: ‘Oh God, I would love to have him. I’ve been mad about him ever since I saw him on-screen for the first time’.

Keen to get a comment from the award-winning actor, the newspaper then spoke to Al Pacino on the topic and told him about Barbara Broccoli’s comments: ‘She said that?’, he asked, adding: ‘I love Barbara, I love Sam Mendes and I love Bond, so if the part was right I would do it in a New York minute’.

As the Evening Standard put it, ‘is it time casting agents created the Godfather of all Bond villains?’ Pacino, who attended the special dinner and presentation with his girlfriend, the actress Lucila Sola, plans to return to the London stage in the spring of 2016 when he will play the lead role in a theatre production of Oscar Wilde’s Salome, which he has previously performed in America.

Meanwhile, Barbara Broccoli’s main movie project, Bond 24 with Daniel Craig as 007, is said to be well into the pre-production stage. Recent press reports, such as one by the Kleine Zeitung in Austria, have also confirmed that some set construction by a small team is underway on the outskirts of the small Alpine village of Obertilliach, in the snowy Austrian Tyrol area, as the JBIFC reported in our summer Newsletter. It is said that the pretty location will see about three days of shooting in early 2015, where a building will suffer some kind of demolition.

Local press reports in Morocco have also recently suggested that Bond 24 will spend about 15 days shooting in Casablanca and Tangier, using members of the main cast. Bond star Daniel Craig was also spotted recently paying a visit to the country, and it is known that Bond 24 location scouts did a recce of possible shooting sites there earlier this year.

According to the latest information, Bond 24 is due to start filming on 6 December, 2014, with key sequences being shot at Pinewood Studios, the traditional home of many of the 007 films.