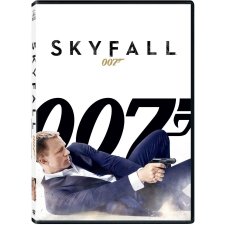 The latest edition of the popular British film magazine Empire (March, 2013), which has just hit newsagents and other general retailers in the UK, has a very positive review of the new Skyfall DVD, which is due to be released in the UK in just over two weeks time.

Neil Alcock, reviewing the latest James Bond movie for the magazine, points out that, with over a billion dollars in the bank, then it’s no wonder that many have claimed Skyfall is the best James Bond film in the history of the series. He adds: ‘It’s probably too soon for that level of rhetoric, but what’s harder to argue against is that of all Bond’s adventures, this is by far the most thematically rich’.

Alcock continues: ‘Notions of honour, loyalty and mortality are woven into almost every scene, while Bond… undergoes the kind of existential crisis that’s hard to imagine occurring in a series which also includes Roger Moore in a clown suit’.

The Empire reviewer is particularly complimentary to the Skyfall director Sam Mendes, and argues: ‘It takes a certain kind of director to pull off something quite so remarkable in what is, essentially, a crowd-pleasing blockbuster. The contributions of writers Neal Purvis, Robert Wade and John Logan cannot be underestimated, but it’s Sam Mendes who pulls everything together with appropriate style’.

Alcock then adds: ‘That he (Mendes) does so while also pulling off some of the best action in recent years is all the more extraordinary: it’s hard to believe now that before Skyfall, Mendes was untested in the field of barnstorming stuntcraft’. As a bit of a bonus for Bond fans, the new edition of Empire also contains a page devoted to some of the commentary gems from the DVD.

Empire magazine has been very generous to Bond fans over the past year. Both the June, 2012, and the October, 2012,  editions carried good coverage of Skyfall, with Daniel Craig on the front covers of both editions. The June, 2012, issue, for example, to help celebrate the 50th Anniversary of the franchise, carried some early preview coverage of Skyfall plus various articles on the rest of the movies in the Bond franchise. Similarly, the October, 2012, issue of Empire also published a glossy and lengthy preview of Skyfall entitled ‘We’ve been expecting you, Mr. Bond’.

The new DVD of Skyfall, which will be released on February 18, will include an hour-long ‘Making of’ documentary called ‘Shooting Bond’, two commentaries on the film (one from Sam Mendes, and one from the Bond producers with production designer Dennis Gassner), some footage from the central London premiere of Skyfall, and some additional Skyfall promotion material.