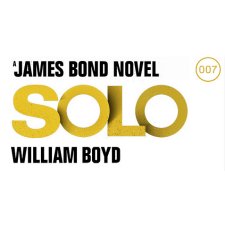 The new James Bond book penned by British author William Boyd will be entitled Solo, and will involve 007 in an adventure that takes him to three continents, the main focus being on the continent of Africa.

The memorable new title was unveiled today (April 15), on the opening day of the London Book Fair (LBF), held at the Earls Court Exhibition Centre in the UK’s capital city. As Boyd was the LBF’s Author of the Day, the award-winning novelist also made a special personal appearance to make the announcement and, in the process, gave some further tantalizing clues about the nature of his new James Bond plot.

Explaining his choice of title, Boyd told the media: ‘Sometimes less is more. For me as a novelist the simple beauty of Solo as the title of the next James Bond novel is that this short four-letter word is particularly and strikingly apt for the novel I have written’. He added: ‘In my novel, events conspire to make Bond go off on a self-appointed mission of his own, unannounced and without any authorization – and he’s fully prepared to take the consequences of his audacity’.

Boyd continued: ‘The journey Bond goes on takes in three continents – with the main focus being on Africa. It’s what happens in Africa that generates his urge to “go solo” and take matters into his own hands in the USA’.

The new Bond author also reflected on his thinking behind the creation of the title: ‘Titles are very important to me and as soon as I wrote down Solo on a sheet of paper I saw its potential. Not only did it fit the theme of the novel perfectly, it’s also a great punchy word, instantly and internationally comprehensible, graphically alluring and, as an extra bonus, it’s strangely Bondian in the sense that we might be subliminally aware of the “00” of “007” lurking just behind those juxtaposed O’s of SOLO…’.

Corinne Turner, managing director of Ian Fleming Publications Ltd, who commissioned Boyd to write the new 007 novel, commented: ‘Ian Fleming had a great aptitude for naming his books and his Bond titles have become true classics. Solo is a simple yet striking title which fits perfectly alongside the other books in the Bond canon’.

Interestingly, Boyd has strong connections to Africa. He was born in Ghana in 1952. His Scottish parents had moved there at the end of the Second World War to run a health clinic. He was raised in the western part of Nigeria and, while at boarding school in England, often went home to Africa during his vacations. His first novel was the Booker-nominated A Good Man in Africa, which was set in the fictional African country of Kinjana. His follow-up novel, An Ice-Cream War, was set in East Africa in 1914.

The new 007 novel Solo will be published in the UK on September 26 and in the USA on October 8.