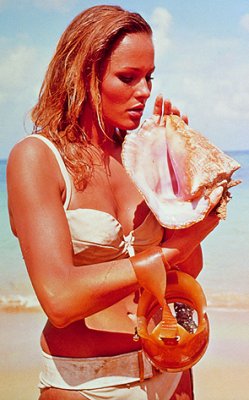 Many happy returns, Ursula! This month sees the beautiful Swiss actress Ursula Andress celebrate her 81st birthday (she was born in Berne, Switzerland, on March 19th, 1936). She was, of course, the first main Bond woman in an EON 007 movie. And it was a stunning entrance, a scene in Dr. No (1962) that fed the imaginations of a whole generation of cinema-goers, and helped create one of the most memorable screen images of the 1960s: Ursula as Honey Ryder, emerging from the sea on a glorious Jamaican beach in a white bikini.

The creator of James Bond, Ian Fleming, had originally described Honeychile Ryder (as she was known in the novel) as the incarnation of Botticelli’s Venus; when Bond first encounters her on the beach at Crab Key in the novel, she is completely naked, except for a belt that carries a hunting knife around her waist. According to a number of 007 historians, it was that particular scene in Fleming’s 1958 book that helped convince the new partners of Harry Saltzman and Albert R. Broccoli that Dr. No was perfect for their first big-screen 007 treatment (they had briefly considered Thunderball, but backed off because of legal issues).

Having found a perfect actor for their new James Bond in Sean Connery, the next casting challenge for the new producers for their first 007 movie Dr. No was to find a suitable actress who could go some way to be their ‘Venus’. Obviously, due to the tight censorship laws that still governed the cinema of the early 1960s, the actress chosen could not appear naked! On the other hand, the producers felt sure that their new movie could push out the visual boundaries as never before. The hunt was on.

Cubby Broccoli at one point came across a picture of a girl wearing a man’s T-shirt, soaked to the skin, her breasts clearly visible. The actress was Ursula Andress, and the Bond producer – immediately struck by her remarkable looks – decided to sign her up, even before he had met her! However, Ursula, who had worked in Italian films and had only held a brief Hollywood contract with Paramount in 1956, was hesitant. She had been dropped by Paramount because she had been reluctant to work on her english-language voice training and general acting skills, and she clearly felt ambivalent about her chosen career path. She certainly had reservations about Dr. No and had to be talked into taking the role by her then husband, the photographer John Derek, who quickly realised what a great opportunity the film would be.

From Jamaica With Love

Shooting on Dr. No began in Jamaica in January, 1962. The scene where Bond first encounters Honey was shot at the beautiful Laughing Waters beach, a location that had been recommended to the film-makers by none other than Ian Fleming himself (who, of course, had his own residence on the Island). However, the beach was not without its hazards: as Ursula was filmed running along the beach, she caught her leg at one point on a piece of coral, and this had to be covered up with extra layers of fake tan. Interestingly, Ian Fleming became a regular visitor to the shoot, and Ursula has recalled that she had numerous conversations with the Bond author, who was clearly smitten with her. In fact, so beguiled was he that – in a nice Fleming in-joke – he included her in his 1963 James Bond novel On Her Majesty’s Secret Service: at one point, at Piz Gloria, Blofeld’s loyal assistant Irma Bunt points out Andress to Bond: ‘that beautiful girl with the long fair hair at the big table, that is Ursula Andress, the film star’.

The movie was released in the UK on October 5th, 1962, and, after a bit of a slow start in the USA, soon stormed American cinemas in 1963, too. The rest (as they say) is history. Ursula became a major global star. Even though she was entirely re-voiced during the post-production on Dr. No, her appearance had extraordinary impact and opened up many new movie opportunities. Ursula also remains, of course, the only actress (in a sense) to have played on screen two central Fleming women from his novels: in addition to Honey Ryder, Andress played Vesper Lynd in the spoof version of Casino Royale made by Columbia Pictures in 1967.

The very first Bond movie was also the first 007 film to be shown on British TV. In a ratings coup for the ITV network in Britain, and to great fanfare at the time, Dr. No was screened on the evening of October 28th, 1975. However, its best British television viewer ratings were actually attained ten years later – on New Year’s Day (January 1st) 1985. 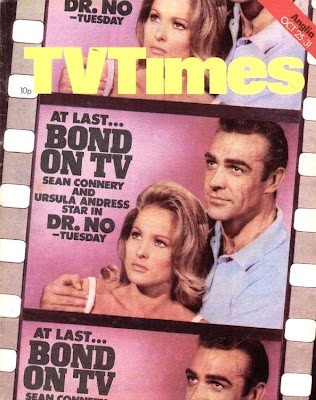