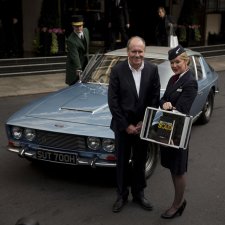 In an article for the ‘Driving and Technology’ section of the popular Sunday newspaper (September 29), Ben Holloway, complete in a dinner jacket and bow tie (naturally!), gave his verdict on the car chosen by 007 continuation author William Boyd for his new interpretation of Ian Fleming’s secret agent.

Holloway was given an opportunity to be a passenger in and assess the new Bond car at the Dorchester Hotel launch of the new James Bond novel, and set out his findings in a special report in the newspaper.

According to Boyd’s new book set in 1969, with his Bentley out of action, Bond is on the lookout for a new car and the Jensen Interceptor catches his eye. But when he pays a visit to the showroom on Park Lane in London, the salesman takes 007 round the back to show him something even more exciting: the FF model. The Jensen FF is a larger, four-wheel-drive relation of the Interceptor.

At the lavish Dorchester Hotel launch, William Boyd himself arrived in a light blue version of the car before signing seven special copies of Solo (numbered 001 to 007), which were then reverentially placed in transparent Perspex briefcases for transportation to Heathrow Airport by British Airways cabin crew members in Jensen cars, before being flown to seven destinations around the world. It was a great publicity stunt, and really caught the imagination of the British press.

In his review of the car for the Sunday Times, Holloway claimed the choice of a Jensen ‘has caused a storm among Bond afficionados and car fans alike’ (really?). As Holloway noted, the choice even caused a letter to the Times newspaper (sister paper of the Sunday Times), expressing ‘shock’ at James Bond’s choice of a car with ‘an American (Chrysler) engine’.

Boyd himself had written a reply to this two days later, saying this reaction was ‘a little overwrought’, and pointing out that, despite its American engine, the Jensen is one of the classic British marques, and also that Bond himself admired some American cars. Even more tellingly, noted Boyd, Ian Fleming himself was the proud owner of a Ford Thunderbird and a Studebaker Avanti. Boyd said that, for James Bond, the choice of a Jensen ‘is entirely apt’.

Interestingly, Holloway, in his review, quoted Paul Lewis, the chairman of the Jensen owners’ club, who agrees with Boyd: ‘It is without doubt the most underrated British car you can think of. People forget that this car came with four-wheel drive in 1969 – that’s more than a decade before Audi developed its quattro system’.

Furthermore, Holloway pointed out that Jensen is not such a leap for Bond as, in both the books and the films, 007 has been known to drive a variety of vehicles.

And his verdict on the Jensen? It packs a ‘suitable punch’, with 325bhp it hits 60mph in just over seven seconds, and has a respectable top speed of 135mph. It is also comfortable and stylish.

Holloway also commented that the version he sat in was ‘maybe a little light on superspy gadgets but nothing Q couldn’t fix’! He concluded: ‘It’s certainly an interesting car. Is it dashing? Yes, but make sure M picks up the fuel bills’.