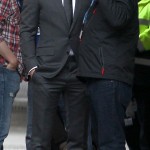 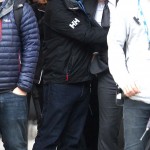 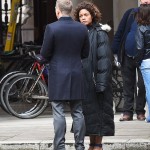 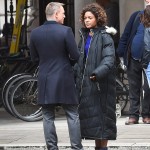 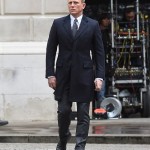 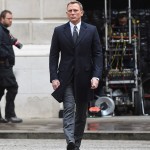 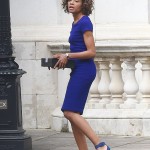 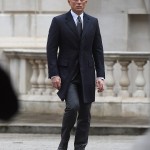 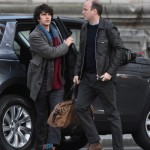 James Bond was on familiar territory in central London again for the latest round of SPECTRE filming last weekend, which brought agent 007 back to the complex maze of neo-classical buildings that form the executive heart of government in the Westminster area of Britain’s busy capital.

The JBIFC had a spy in the field, who has just filed the following briefing for M’s eyes only.

It proved to be another very busy weekend for the stars and crew of SPECTRE as they again shot some key sequences for the new James Bond movie in central London: filming took place at a Hall in Covent Garden, on roads near Bank and Moorgate tube stations, at government buildings in Whitehall, and at Great Scotland Place (a location previously used in Skyfall). Some more footage was also taken later in the weekend at Trafalgar Square and Admiralty Arch (see our our separate report ‘Bond meets the Admiral’ on the latter).

Activities kicked off early on the morning of Friday May 29 when Director Sam Mendes oversaw some filming with Daniel Craig, Naomie Harris (Moneypenny) and others at the famous and impressive-looking Freemasons Hall, which is located in Great Queen Street, in the heart of London’s famous Covent Garden area. It was a return visit to the area for the SPECTRE crew as, just a week previously, they had utilised the iconic Rules restaurant in Maiden Lane, which is just a short walk away.

Ironically, the Freemasons Hall, which has also proved popular with other film and TV productions (including the British TV spy series Spooks) is just minutes away from the Drury Lane Theatre in Catherine Street (where the Sam Mendes-directed revival of Charlie and the Chocolate Factory opened in October, 2013). Bond aficionados can also still visit the very popular the Bond in Motion exhibition, which is still open to the public at the nearby London Film Museum in Covent Garden.

Interestingly, in July, 2013, an Aston Martin DB5 from Skyfall was put on display at the Freemasons Hall as part of a celebration of the 100th birthday of the Aston Martin production company. Freemasons Hall is the headquarters of the United Grand Lodge of England, and the Lodge has been a presence on the site since 1775. The current building, which is the third incarnation of a Lodge building on the site (and which is open to the public), is especially popular with film-makers and other organisations as it is arguably one of the finest Art Deco buildings in England.

Mendes and the SPECTRE crew spent a good part of Friday filming some interiors at the site. Later, during the course of Friday evening, Mendes, Alexander Witt and members of their support crew, including stunt coordinator Gary Powell, appeared at a road spot in Coleman Street, which is located between Moorgate and Bank tube stations, in the financial area of the City of London, not far from the Barbican and St. Paul’s Cathedral. Some vehicle sequences were shot here with a camera car, a Jaguar, a Land Rover and Daniel Craig’s stunt-double, who wore a latex mask to create the impression that it was Craig himself.

The next morning (Saturday, May 30) the SPECTRE crew began filming at a number of sites in the Whitehall area of Westminster, utilising a complex of official government buildings close to Parliament Square and Westminster Abbey. Scenes were shot both at and inside the government offices in Great George Street, which is the location of the UK’s Treasury and some other core executive departments. The same day, the official Bond Twitter feed released an image of a camera crane overlooking the famous Treasury roof and circular courtyard of the government offices in Great George Street. In fact, according to The Times newspaper (June 1), even the British Chancellor of the Exchequer, George Osborne, could not resist sneaking a peek at the SPECTRE filming in the Treasury courtyard, when he popped in to work on Saturday morning.

Scenes were also shot at and inside the nearby Foreign and Commonwealth Office (FCO), which has distinctive carvings and neo-classical pillars on the exterior, and is located in the triangle between Westminster tube station, the Cabinet War Rooms and Downing Street. Needless to say, the streets which saw the filming on Saturday morning and early afternoon were firmly closed to the public during the shooting and security was tight. During a break, director Sam Mendes was spotted in conversation with Craig, and Craig was also seen in conversation with Naomie Harris. Harris, in her filming scenes, looked stunning in a blue dress and matching shoes, and was seen carrying a small flat box.

Later on Saturday afternoon, members of the crew began moving filming equipment from the FCO buildings over to Great Scotland Yard and Scotland Place, which is about 5 minutes away. Just after mid-afternoon, the main stars and crew then jumped in their cars and drove over to Great Scotland Yard and Great Scotland Place. The latter, of course, is the side street which contains the Department for Energy and Climate Change, the roof of which saw a key scene between Bond and Miss Moneypenny at the end of Skyfall. After some work inside, the crew wrapped up mid-evening on Saturday and Sam Mendes drove off in his Range Rover.

The stage was set for some filming the next day, the last Sunday of May. Although it is all notably hard work at times, there is evidently a very good atmosphere on set, no doubt helped by the remarkably calm presence of Mendes, who clearly has a firm vision of what he wants to do and how to go about it. He recently remarked that he wants SPECTRE to be the best Bond film ever, and all the filming evidence seen so far could well prove him right.