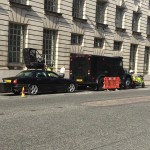 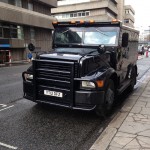 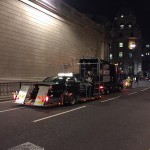 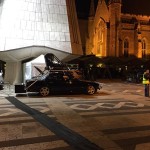 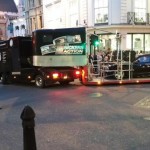 James Bond and key members of his MI6 support team paid a return visit to some familiar territory on Thursday 4th and Friday 5th June, when shooting for SPECTRE was carried out in a few of the streets around the famous Guildhall building in central London.

The JBIFC had an agent in the area, who was able to be a spectator at the feast (so to speak) and conducted a stealth surveillance operation. He has just filed the following briefing for your eyes only. Warning: There are one or two possible minor spoilers.

The centre of the British capital has seen some regular location filming for SPECTRE during the course of May and June, especially on the River Thames and in the Westminster area, but one tranche of this shooting has also focused on an area slightly further to the east, a district which has a lot of history attached to it. On June 4-5th, the SPECTRE unit shot various vehicle action scenes at night in the narrow streets of the ‘Square Mile’ (as it is called), which is located in the financial and business heartland of the City of London district of Britain’s busy capital.

A week previously, on the evening of Friday 29th May, the unit crew, including Sam Mendes, Alexander Witt and stunt coordinator Gary Powell, had appeared at a road junction in Coleman Street, and some filming had been carried out beside the Bank of China, which is on the corner of Princes Street and Lothbury Street, in the heart of the ‘Square Mile’. This had involved a camera car, a Jaguar, a Land Rover and Daniel Craig’s stunt double (who wore a latex mask to create the illusion that it was Daniel himself). Some smoke was used by the special effects team and shots were also heard during the filming that evening.

A week later, after some filming had been carried out in Trafalgar Square over the weekend of May 30-31st, including inside Drummonds Bank in the southern corner of the Square (and also on the evening of June 3rd), the focus of activity very much switched back to the ‘Square Mile’ again: June 4th and 5th saw further filming activity back in the area, picking up on the footage taken on May 29th. This time, however, the filming was more extensive, making use of some of the narrow side streets that criss-cross the area.

The unit ‘base’ for this was set up in what is called Guildhall Yard, which was once the site of a former Roman amphitheatre, and is now an expansive courtyard area, paved with attractively-patterned Roman-style white and brown stone slabs, arranged in a geometric pattern. A black slate band across this marks the perimeter of the old amphitheatre. This paved area is next to Guildhall (the civic centre of the Corporation of London), in a square which also contains the semi-Gothic style Guildhall Art Gallery (added in the 1990s) and the very historically famous church St. Lawrence Jewry Church, one of the oldest in London.

In fact, the Guildhall building, which is located just off Gresham and Basinghall Streets in the financial heartland of the City of London, provided a perfect base of operations for the SPECTRE unit, who were able to use the relatively enclosed Guildhall Yard square to park unit vehicles, store equipment (such as metal support framing, lights and cameras), and also conduct preparation and maintenance on the various cars, camera vehicles and lorries being used in the filming, including a large Bickers Action vehicle, with its special camera cabin.

Supply cables ran across part of the square and various crew members were seen ferrying laundered clothes into the unit dressing area. Temporary white tent sheeting was also put up around the main entrance to the modern section of Guildhall (underneath the famous Corporation of London emblem with its words ‘Domine Dirige Nos‘), so that principal members of the cast could have some privacy and also quickly step into the main vehicles being used for filming.

During the course of the early evening the narrow streets leading into and off Gresham Street began to see various unit lorries carefully dropping off equipment and cables in the area, while unit security crew in high visibility jackets began to take their positions at regular intervals in doorways and alleyways and on many of the street corners in readiness for the main filming. Various barriers were also put in place at key junctions.

At about 8.30pm a catering van with a generator also arrived and set up in nearby Aldermansbury Square to serve members of the unit. As the sun slowly dipped at the end of a hot day and the temperature became notably chillier, the caterers saw a brisk trade, with regular visits from crew members walking over from Guildhall Yard and ferrying trays of cups and light snacks back to the main unit base.

After much preparation, the Bickers camera vehicle and main Range Rover cars being used in the shooting pulled out of Guildhall Yard and began a filming circuit of some of the nearby roads (which had been hosed down by fire tenders, in order to create a ‘just rained’ effect). This included a sequence with Naomie Harris (Miss Moneypenny) in the back-seat of a car which had been positioned on a trailer being pulled by the Bickers vehicle with its specially adapted camera cabin. When rolling, crew members manning the barriers were asked to remove their ‘visies’ (yellow jackets) to avoid them accidently being captured on film in the distance.

In the Guildhall Yard itself, when the Bickers van and other vehicles returned, there was much activity as crew members sorted out equipment and placed cameras on the side of a vehicle in preparation for the next round of filming. This process took about an hour. In the meantime, Rory Kinnear (Tanner) arrived at about 9.50pm, driven into the square by a driver in a black Range Rover, and Sam Mendes and his key director of photography, Hoyte van Hoytema (who had been directing the action from the special camera cabin of the Bickers van) took a short break in the Yard. After checking some of the footage on a monitor in the Bickers camera cabin, they also then took the opportunity to grab a few bites, which were being handed round on a foil tray by a crew member. Mendes in particular also had a long conversation with his stunt co-ordinator Gary Powell, who was a regular presence in the square during the course of the evening.

After much fixing in place of camera holding frames and other rigging preparations, it was not until 10.45pm that the Bickers camera vehicle and its small convoy were ready to pull out of the Yard again and re-enter the surrounding streets. By this time of the evening, a few people from a highbrow cocktail event at the Guildhall Art Gallery were beginning to leave the Gallery and wander into the square, and some of these were politely asked not to get in the way of the unit activities.

Shortly after the large Bickers van had pulled out of the square, Ralph ‘M’ Fiennes emerged at 11.00pm from the white-curtained area of the main Guildhall entrance and quickly jumped into his Range Rover, which then left the square to join the nearby action. Crew runners could be heard referring to ‘Ralph’ and ‘D.C.’ on their radios.

The pattern above – of the filming convoy re-entering and leaving the main Guildhall Yard after about a good hour’s careful preparation and frantic work – was repeated a number of times into the early hours of the morning. Whoever said filming was glamorous?!

On the Friday evening, with the Guildhall Yard once again being used as the unit’s main base, the same streets around the nearby area were carefully prepared and closed off, with the main filming action taking place after darkness fell. As with the Thursday evening, one of the main challenges for the unit support crew members was trying to manoeuvre the large Panalux vehicles into place to drop off the required cables and camera equipment (the sheer amount of such equipment needed for location filming is quite amazing). However, as much of this work had been carried out on the Thursday evening, the process seemed to go much more smoothly (or so it appeared).

Similarly, another challenge was to ensure that members of the public who were leaving some of the popular wine-bars which are dotted around the narrow streets and alleyways of the area did not accidently wander into the background when the cameras rolled.

In the Guildhall Yard itself, which once again had temporary metal barriers in place at the main entrance to the square, there was a very busy but jolly atmosphere once again, with careful preparation and maintenance taking place again on the filming vehicles in a pattern that very much echoed the previous evening.

Similarly, as with the Thursday evening, the Bickers camera vehicle was used to film cars moving at some speed through the nearby streets at night-time, roadways which had (once again) been hosed down by fire tenders to create a post-rain ‘wet’ look in the streets. At one point, the main focus of action seemed to be once again outside the Bank of China (on the corner of Princes Street and Lothbury Street), and at another point near the junction of Gresham Street and King Street (which has a Pret a Manger sandwich outlet on the corner). King Street itself also saw some filming action. Interestingly, as with Thursday’s action, a black armoured van could also be spotted being used in some of the filming.

And, in another echo of Thursday evening, various crew members took the opportunity to go inside the famous St. Lawrence Jewry Church (the church of the Corporation of London), next to Guildhall Yard, a church which also now contains a special small prayer room dedicated to those who have served and lost their lives with the Royal Marines.

It was fascinating for this author to observe the SPECTRE crew at work at first-hand and, despite the evident logistical and other filming challenges involved in shooting in this particular part of Britain’s capital, it is clear that the sequences filmed will look very atmospheric and tense on the screen.

For Sam Mendes, given his other non-Bond interests, the historical literary connections of the local area were probably not lost on the SPECTRE director: a small monument to Shakespeare’s friends, with a head-and-shoulders sculpture of the great playwright himself on top, is located in the nearby St. Mary’s Aldermanbury Gardens.

Moreover, on the external wall of the Guildhall Art Gallery, another small statue of Shakespeare looks out over Guildhall Yard itself. As the Bard once wrote, all the world’s a stage. For a few nights in this square, James Bond was the main player.