Bonding with James in Austria: Filming and Photo Call 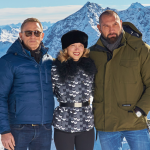 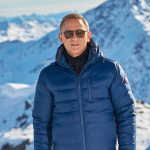 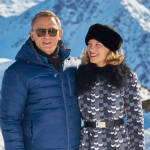 James Bond arrived in Austria earlier this week for some SPECTRE filming in the beautiful snowy Alps. After two days of filming in the small village of Altaussee, the Bond crew then moved on to Solden for some more sequences. Solden also saw the movie’s first Austrian press call.

While Daniel Craig was shooting some sequences at Pinewood and in central London on the River Thames back in December, some preliminary aerial shots had already been taken for the Austrian Alps sequences by the Second Unit, who used a camera helicopter for the footage and were overseen by Second Unit director Alexander Witt.

A 300-strong crew have now arrived in Austria, together with some members of the principal cast. Craig flew into the village of Altaussee on the afternoon of Sunday, January 4, to something of a snow blizzard. Unfortunately, the first day of filming (on Monday, January 5), which was planned to take place on the shore and on the water of Lake Altaussee (which is not too far from the village but can be quite a trek on foot), was also hampered by the inclement weather conditions. Monday morning saw a cold and rather windy atmosphere greet the crew, with plenty of snow and ice. Enrico Jacob, of the state film promotion agency, speaking to the local media, said that filming at that point was not possible because of an extreme wind on the lakeside meadow.

While the sun did emerge in the afternoon, this did not last very long and, by the time the cameras were ready to roll, an icy fog had descended onto the lake. Craig was still seen on the shoreline of the lake and, a short while later, some footage was taken of Craig on the lake itself, with him standing in a traditional Alpine wooden long-boat. However, according to local observers from the village, the filming had finished by 4.30pm due to fading light.

The second day of filming at Altaussee, carried out on Tuesday, January 6, saw much better weather conditions, with a sunny and clear blue sky and a more hospitable wind chill. In contrast to Monday, the crew were able to start early in the morning and get in a full day’s work. Craig was taken by helicopter from his hotel to the lake location and was on set by 7.30am. Tuesday’s filming continued well into the afternoon and was over by 5.00pm, when Craig was seen back at his hotel. In total, about 4 kilometers of the 8-kilometer perimeter of the lake were closed to the public while the shooting took place, and security was tight in the area. Local villagers, though, were very excited to have 007 in the area.

On Wednesday, January 5, the crew and cast moved on to Solden for some sequences with a cable car and at a nearby restaurant, and it was here in Solden, on a truly lovely sunny Alpine day, with some crystal-clear light, that a special SPECTRE press call was held. Craig was joined at the press call by his co-stars Lea Seydoux (who plays Madeleine Swann) and Dave Bautista (who plays tough henchman Mr Hinx). It is expected that the Solden filming will last until Saturday, January 10, with the crew and cast then moving on to the Alpine village of Obertilliach to commence filming there on Monday, January 12.

Obertilliach, in particular, has seen considerable preparation and construction work taking place for the movie in recent months. According to separate reports, Christoph Waltz, who comes from Austria, has also been invited to join the crew on location in Austria and observe some of the filming, although he is not due to start work on the movie himself until February.