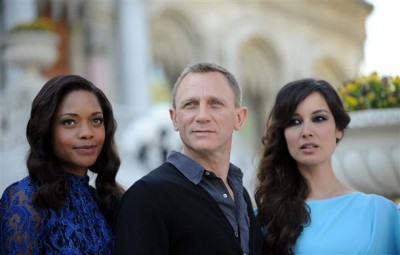 Key members of the Bond production team praised the locations and warm hospitality of Turkey when speaking at the ‘Skyfall’ press conference held in Istanbul on April 29.

The press conference, which took place in the plush surroundings of the 5-star Ciragan Palace Hotel in Istanbul, saw members of the main unit and the two Bond producers line up on stage to answer various questions from the Turkish and international media. The ‘Skyfall’ second unit has already been shooting in Turkey for about 100 days, using locations in the southern province of Adana, as well as the famous Grand Bazaar in central Istanbul. Since members of the main unit arrived in Turkey on April 22, location shooting has included the southwestern coastal town of Fethiye, where shooting took place on the beach and also on a luxury yacht on the sea near the town. Attention has now switched to shooting in Istanbul itself.

Bond producer Barbara Broccoli said Istanbul was deliberately chosen as the venue for ‘Skyfall’ in order to mark the 50th Anniversary of the James Bond film series, and she pointed out that it was Bond author Ian Fleming’s favourite city. At another point in the conference, Bond star Daniel Craig reminded the audience that ‘Bond has had a close relationship with Istanbul’; he also revealed that this was his second visit to the Turkish capital, adding: ‘This is a beautiful city. But on the other hand, we had a great time in Fethiye’.

The director Sam Mendes also commented at some length on Turkey’s capital city: ‘We wanted to be here because it is the most magnificent place. It is an incredible city. I can’t get enough of it’. He told the assembled press that he wanted to try to capture the essence of the country, ‘both old and new’ – both its traditions and its modernity: ‘We looked at everything the city could give us and we feel we’ve chosen what’s best for the movie and the story but also what’s best for the city itself’.

Interestingly, Mendes revealed at the conference that they were thinking of shooting a car chase sequence on the famous Bosphoros Bridge, located near the edge of the city. He also said: ‘We are here for 20 days and we have experienced the best time we’ve had during shooting. Istanbul is the best city in Turkey’. He added that the Turkish people had been ‘very friendly’ towards the crew.

New behind-the-scenes footage from Turkey, which has just been released on MSN, shows Craig’s smartly-suited 007 crouching down in a market place and firing his Walther PPK at two motorbikes, while crowds of market shoppers scatter and duck for cover.