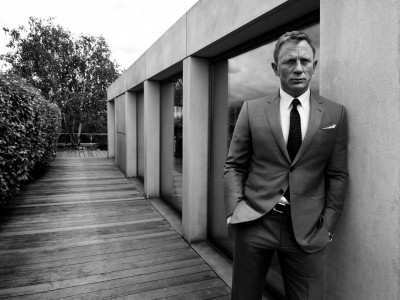 The latest issue of the glossy style magazine Esquire contains a new interview with 007 star Daniel Craig, who looks back on his decade as Bond and also responds to some questions about SPECTRE, the latest entry in the popular EON franchise.

The new interview, conducted by Alex Bilmes (making this interview his third one with Craig over the years), is also accompanied by a number of photos of the Bond star by Greg Williams, and was given about a week after the completion of filming on the latest Bond movie in July. It focuses in particular on a key question: how do you follow Skyfall, the most successful Bond movie ever?

As Craig prepares for the release of the follow-up movie, SPECTRE, the interview also explored with the Bond star his past decade as 007, and how he has redefined the secret agent into a symbol of masculinity for the modern age: embattled, conflicted, but still standing as the James Bond we all love and know – and still ready to take on the latest villain and, indeed, anything else the world throws at our hero.

The magazine reveals that Craig’s very last scene on the movie took place on a lake in Bray, in Berkshire, and he then went straight from the wrap party into three days of photo shoots and other publicity commitments, including posing for the movie poster and other essential duties.

Looking back over his ten years as James Bond, Daniel confirmed to Bilmes that, when he took over the role for Casino Royale (2006), the movies were in a situation ‘where you couldn’t send things up’ any more, so Fleming’s ‘blunt instrument’ was restored, and  in the process – was revealed as painfully vulnerable, physically and emotionally. According to Craig, if you meet somebody who is at the best part of their life and they’re really happy, ‘I’m not sure how interesting that is cinematically’. In other words, as the interviewer puts it, the essence of drama is conflict.

Craig also commented that, when he was sent the script for Casino Royale in 2005, ‘I had been prepared to read a Bond script and I didn’t. They’d stripped everything back and I went, (approvingly) “Oh, shit!” It felt to me they were offering me a blue-print, and saying: “Form it around that”. And I went, “OK, I can do that”‘.

The Bond star added: ‘I’m a huge Bond fan. I love James Bond movies, and I love all the old gags and everything that goes along with that. No disrespect to what happened before but this is completely different. It’s got weight and meaning. Because I don’t know another way to do it. However big and grand it is, however boisterous the script is, you look for the truth in it, and you stick to that, and then you can mess around with it. And if you have that and you have the car chases and explosions as well, then you’re quids in. But there have to be consequences. He has to be affected by what happens to him. It’s not just that he has to kill the bad guy, there has to be a reason for it’.

On the question of how to follow up the smash-hit success of Skyfall, Craig conceded that everyone was ‘daunted’ at first, but he also paid tribute to the skills of Sam Mendes, and – when asked if the ‘classic Bond’ was still in place for the new movie – Craig responded ‘Times 1o!’, and repeated: ‘It’s Skyfall times 10!’ In Craig’s estimation, SPECTRE is ‘a celebration of all that’s Bond’.

As well as some further reflections on the challenge of making a movie to rival and surpass Skyfall, the new interview also contains some key plot revelations, so purchasers may wish to buy the new issue of the magazine and put it away until after the movie is released!

The new issue of Esquire magazine (October, 2015) is on sale now, priced £4.25 in the UK. There is a choice of two covers, and it will undoubtedly be a ‘must-have’ purchase for all good Bond fans. 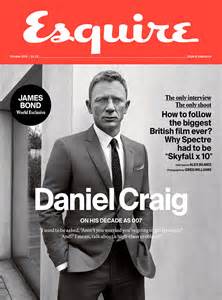