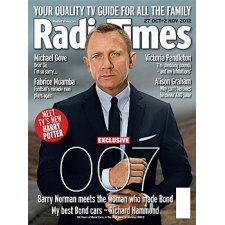 The magazine (covering the period October 27-November 2), which appeared in UK shops on the same day as the premiere of the new Bond movie ‘Skyfall’, also has a Daniel Craig cover, and is designed to help promote both ‘Skyfall’ and the upcoming special Bond edition of the BBC’s ‘Top Gear’ programme (which will be transmitted on Monday, October 29).

In the interview, Barry Norman noted that the Bond franchise is a remarkable franchise, having earned more than $12 billion at the box office over its 50 years, but staying in the hands of the same family, the Broccoli family, for the same length of time.

Barry Norman met both Barbara Broccoli and Michael G. Wilson at their office in Piccadilly, in London, for the interview, where they were preparing for the release of the 23rd 007 movie. Looking back over the 50 years and the continuity in the series, Broccoli said: ‘It says something that there are fewer actors who have played James Bond than there are men who have walked on the moon’.

Interestingly, at one point in the interview, when she was asked about the decision to cast a woman in the role of ‘M’ (Broccoli was instrumental in choosing Judi Dench), and about the choice of the other women in Bond’s life, including Miss Moneypenny, Broccoli said of the latter: ‘You can look forward to that some time in the future…’.

Nevertheless, despite the tinkering with the formula and the occasional change of lead actor, Norman noted that Bond’s longevity is indeed remarkable. Michael Wilson put it down to the fact that, ‘like Sherlock Holmes and Batman, he’s become part of the culture’.

At another juncture in the interview, Barbara Broccoli said she thought it was disappointing that the 007 films had not won more awards for things like editing, production design and special effects, because ‘over the years they have made ground-breaking contributions to cinema’, as well as for the actors themselves. She told Norman: ‘I am surprised there haven’t been acting nominations, if not for Bond then for the support, although I wouldn’t be surprised if Judi was nominated for this one’.