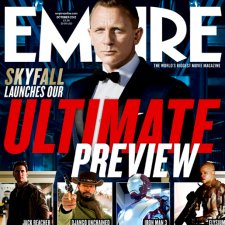 The new edition of the best-selling British movie magazine ‘Empire’ includes ‘Skyfall’ in its Ultimate Preview of upcoming films.

The magazine, which hit British news-stands on August 30, carries a photo of Daniel Craig as Bond in a tuxedo on its front cover, and inside there is a detailed article on the new 007 film, which includes comments from Craig, Judi Dench, Javier Bardem, Sam Mendes, Naomi Harris, and the new ‘Q’ Ben Whishaw.

The magazine also contains some comments from Sam Mendes on the special 007 film made by Danny Boyle for the Olympics 2012 Opening Ceremony on July 27, in which Daniel Craig was joined by none other than Queen Elizabeth II. ‘I loved it’, Mendes told the magazine. ‘Of course, I knew that that was being shot. Danny was down on the set a couple of times and I was aware of it all going on. I said, “I’m staying out of it!”‘.

The ‘Empire’ article is accompanied by some new and attractive stills and pictures from ‘Skyfall’, including a new still of Daniel Craig’s 007 pointing his gun (with a fallen statue in the background), a behind-the-scenes shot of Mendes with Craig and Ben Whishaw, and a glimpse of Mendes in conversation with Craig at Hankley Common in Surrey (which doubled for a Scottish location). There is also a still with a new angle on Javier Bardem’s villain Silva, who is being quizzed by Bond and ‘M’, and new stills of Bond with Severine (Berenice Marlohe) and of him fighting Ola Rapace’s villainous henchman Patrice, on top of a rail freight carriage in Turkey.

The article also reveals that Sam Mendes was hard at work in the editing room during the Olympic games period, and he referred to the ‘very compressed’ post-production schedule on ‘Skyfall’. It is also revealed by Mendes that the studio have already seen a fine-cut of the movie, ‘and they’re thrilled’. Mendes added: ‘And Daniel’s seen it and he seems delighted. So it’s looking good’.

Interestingly, ‘Empire’ notes that Mendes said he would ‘absolutely consider’ doing another Bond movie, and was pleased when told that the first ‘Skyfall’ trailer received very postive reactions, especially the moment when Craig checks his cuffs on the freight-train. Mendes said: ‘That’s good because it’s a Bondian moment’.