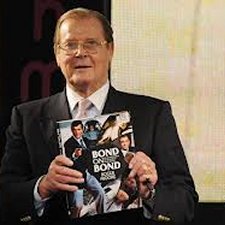 Former James Bond Sir Roger Moore, who has been busy publicising his latest book ‘Bond on Bond’, has expressed some further praise for Daniel Craig and ‘Skyfall’ while speaking to an American news network.

Sir Roger’s comments follow the strong admiration and approval that he recently gave to the new James Bond movie while he was promoting his book in a series of live stage interviews in the UK, after he had attended a private viewing of the latest Bond adventure.

In a new interview, Sir Roger has repeated his keen enthusiasm for Craig’s new 007 film. Sir Roger, who was speaking to NBC, said that, if he had had seen ‘Skyfall’ before finishing his new volume on the world of James Bond, he would have devoted a whole chapter to Daniel Craig who, he said, ‘is a superb Bond’. The third 007 actor added that, with Sam Mendes directing, ‘Skyfall to me is just an extraordinary piece of motion picture. I think Skyfall has guaranteed another 50 years for the franchise’.

Sir Roger’s new book is proving to be an excellent Christmas present for Bond fans, and has been selling well in bookshops. It is a comprehensive and glossy exploration of the whole 50 years of the James Bond movie franchise, concentrating mainly on the films up to the end of the Brosnan era, and providing some superb anecdotes and inside stories about Sir Roger’s own time as 007.

Nevertheless, ‘Bond on Bond’, still contains some coverage of Daniel Craig’s first two films and his interpretation of James Bond. At one point, Sir Roger also reveals that, the day before Daniel was actually confirmed in public as the new 007, the Bond producer Barbara Broccoli e-mailed Moore telling him about their choice: ‘I was delighted’. While he was also upset by the subsequent anti-Craig campaign in the British press, he notes: ‘The doubters were soon silenced – and many were converted’.

Moore writes that he did not actually meet Craig until October, 2008, when they shared a room at the London Palladium, while attending a centenary celebration of the life of Ian Fleming. Craig greeted Moore ‘like a long-lost friend’.  At one point, Sir Roger concludes one of his sections about Craig in the book by saying: ‘His Bond is terrific, and I hope he’ll reign for many years to come’.

Bond on Bond: The Ultimate Book on 50 years of the Bond Movies, by Roger Moore (with Gareth Owen), is published by Michael O’Mara Books Ltd, London, and is available in hardback in all good bookshops now.