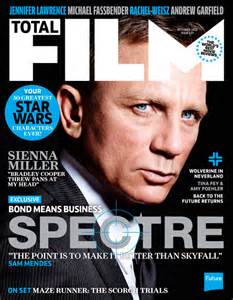 Now pay attention, 007. The new issue of the popular British movie magazine Total Film (October, 2015), which has just hit retail outlets, contains a 10-page exclusive feature on the making of SPECTRE, with interviews with the 007 star Daniel Craig, director Sam Mendes, and other leading members of the production.

A key question in the feature is how on earth can the Bond team top the huge success of Skyfall? As far as Total Film is concerned, all the signs are that they will repeat the magic of Skyfall in many ways, and more.

The Total Film interview with Daniel Craig took place in the Corinthia Hotel in central London, which, ironically, is very close to Westminster Bridge, the location for some key action sequences in the new movie. Craig was ‘de-mob happy’, having just completed the long 8-month shoot.

The magazine also had the opportunity to interview Sam Mendes a few weeks later, who was holed up in his editing suite in London’s Soho, still working on the movie. He said: ‘I’m excited. I feel a real sense of achievement. We’ve done what we set out to do. That’s not to say everyone will love it or it will succeed on every level, but we came away feeling good. The only point of doing a movie – this next movie – is to try to make it better than the last one’.

The Total Film article has brief interviews with Lea Seydoux and Monica Bellucci, and there are also some teasing comments about the actual plot themes of the new movie. All the cast – naturally – operate a strict code of silence when it comes to the plot details, including the question of Blofeld, SP.E.C.T.R.E., and even the cat. All the cast recognise how the intense speculation about all this has added to the sense of anticipation in the build-up to the new movie. Sam Mendes said he loved the speculation: ‘That’s the game – if you don’t want to embrace that, don’t do a franchise movie’.

Interestingly, however, Mendes did drop some fascinating hints to Total Film about some of the core characteristics of Franz Oberhauser (who is played, of course, by Christoph Waltz). Mendes told the magazine that, having deliberately gone down what he called a ‘flamboyant’ route with Javier Bardem’s villain Silva in Skyfall, he was keen to switch the threat this time around: he said Silva was a ‘cavalier’, whereas he felt Oberhauser needed to be a ’roundhead’ – Oberhauser ‘needed to be something very, very frightening and surgical, precise’.

The magazine has also promised more coverage of SPECTRE in its November issue, which will go on sale on 25th September. We can’t wait! 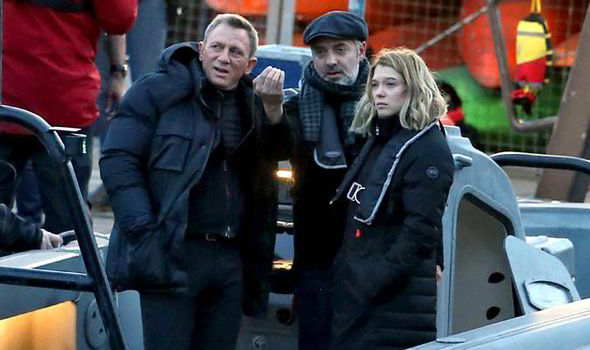