Bond is Back! New SPECTRE preview shown on American TV 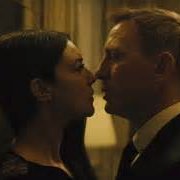 Bond was well and truly back, and took many people by surprise! Television viewers in the USA were treated last night to a new preview of exciting footage from the eagerly anticipated upcoming 007 adventure SPECTRE.

The preview, which consisted of 30 seconds from the teaser trailer together with 30 seconds of fresh unseen material, was broadcast on ABC TV during the NBA Finals.The general reaction of fans and critics alike has been hugely positive today, with praise for the very ‘classic’ lighting, the stylish look of the movie, and the breathtaking glimpses of Bond in action in Austria and in Italy.

The living highlights of the second half of the TV spot included:

Dramatic flames shooting out the Aston’s rear towards a Jaguar;

A further brief glimpse of 007 at the mysterious and shadowy ‘meeting’;

Craig and Seydoux in a romantic clinch in a train cabin;

Some helicopter action from the pre-credits in Mexico;

Some pre-credits Day of the Dead footchase action;

Bond in action in the Austrian Alps;

Some panoramic views of Rome at night from the air;

Seydoux in a car;

Bond wrestling with his plane gears;

Ben Whishaw’s ‘Q’ looking up from his computer screen.

The JBIFC’s verdict: Nobody does it better! Crisp daytime footage, excellent mood lighting at night, exciting action scenes, and the promise of great interaction between the main stars. What more could a Bond fan want?