Bond is Back! New poster released 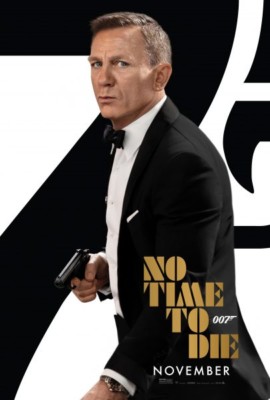 Bond is Back! A great new poster for No Time To Die, featuring Daniel Craig in tuxedo with a handgun, was officially released on Tuesday, 1st September, 2020, much to the delight of many 007 fans.

The new image was quickly shared across social media and also on film magazine sites.

It reveals that November is still planned as the release date for the new 007 movie, and comes after some months of relative quiet on the marketing front for the new James Bond film. In fact, all the available indications are that the new 007 adventure will still be released as announced earlier this year (after a delay due to Covid-19).

Indeed, Tenet, which has been released to international markets, performed very strongly on its opening weekend, especially in the UK, and a new optimism has broken out that cinema is seeing some badly-needed revival in the wake of the C-19 lockdown. It is also a strategy to gain momentum for a movie before its U.S. release (the American box office remains essential to the success of such movies, but some parts of the USA have been strongly impacted by the pandemic).

Lockdown, of course, led to the temporary closure of many screens across the globe, but it seems that various markets are opening up again for movie business as confidence gradually returns. Interestingly, a new teaser trailer for No Time To Die is also being released.

Welcome back, Mr. Bond: We’ve been expecting you.