Bond is Back: More Austrian Action 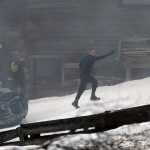 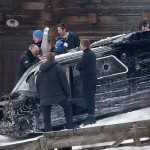 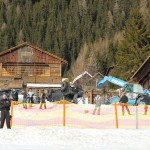 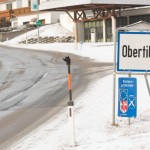 The Austrian media have carried some photos of the latest SPECTRE filming from Austria, where the main unit have been shooting some dramatic action scenes in the Alpine snow in the small village of Obertilliach.

Under the thoughtful watch of director Sam Mendes, who oversaw much of the work on the latest sequences, Daniel Craig’s 007, clad in a dark polo-style ski outfit and boots, was seen on set aiming at a target with his handgun, and he shot various scenes involving the badly-damaged wreckage of the cockpit of a crashed plane. Some explosive and smoke special effects were also employed at one point in one of the large wooden Alpine buildings which have been carefully constructed on the Obertilliach set over previous months.

The main filming in Obertilliach commenced on January 12th and is expected to continue until January 17th, with a second unit remaining in the area for some further filming, which will last into February. Ben Whishaw, who plays ‘Q’, was also seen on set in Obertilliach.

According to locals in the area, one of the challenges faced by the crew during their time in Obertilliach has been – rather surprisingly – a lack of snow! At one stage, in the days before main filming commenced, the Obertilliach cable company was on hand to supply the production crew with extra snow, and additional snow has also been trucked in from other areas. Members of the crew were also seen unloading what is known as ‘film snow’, supplied by the ‘Snow Business Co’. An estimated 15 special snow cannons have also been used at various points to top up the snow on the set.

Interestingly, a local official also revealed to the media that the film company have been storing two planes at a nearby airfield, ready for use in the Obertilliach filming. According to sources close to the production, the film-makers have pencilled in approximately 22 days of filming in the Austrian Tyrol area overall.

Lack of snow was definately not a problem in Solden, though. In the week prior to the latest Obertilliach filming, the crew spent five days shooting at and around the iconic ‘Ice Q’ restaurant in Solden, which is located 3,048m up on the famous Gaislachkogl peak. This included some shots with Craig, Lea Seydoux and Dave Bautista, with Craig and Bautista filming in the snow near the summit of Gaislachkogl, directed by Mendes.

The distinctive cuboid-shaped Ice Q restaurant, with its walls of sheer glass, together with the local cable car, offer some truly panoramic views across the Tyrol region. Some very lucky local skiers were approached at one point by the production company and agreed to be temporary background extras in and around the restaurant and near the cable car.

Local observers also said that the production company shot some SPECTRE sequences near the road leading up to Rettenbach glacier, including in a tunnel to the glacier and near the famous number 30 piste. Needless to say, there has been a great deal of excitement in the local area at the news that 007 has been present, and it has been confirmed that local authorities are already planning to make use of the ‘Bond connection’ for local tourism purposes in the near future.